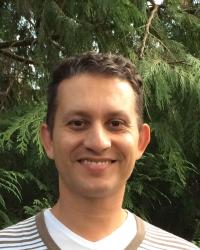 Eduardo Viana da Silva received his Ph.D. in Luso-Brazilian Literature with an emphasis in Applied Linguistics from University of California, Santa Barbara (UCSB). He holds an interdisciplinary degree in teaching “Certificate in College and University Teaching” from UCSB, a TESOL (Teaching English to Speakers of Other Languages) graduate certificate from Brigham Young University (BYU) and an M.A. in Luso-Brazilian literature, also from BYU.

Before coming to University of Washington in 2015, Eduardo taught language courses, Luso-Brazilian literature, and topics on Brazilian culture at UCSB, BYU, University of Utah, and the Salt Lake Community College. He also taught English as a Second Language in a private school (ILAC) in Vancouver, Canada, between 2007 and 2010. His main areas of interest are Critical Pedagogy, Applied Linguistics, Luso-Brazilian literature and culture, curriculum development, and Global Citizenship.

Eduardo is currently working on a textbook for Portuguese - Bate-Papo - An Introduction to Portuguese as an Open Educational Resource (OER). This book has been supported through a UW Libraries Award, the Department of Spanish and Portuguese, the Language Leaning Center, and the Center for Global Studies at the UW. This e-text is available at https://uw.pressbooks.pub/batepapo/