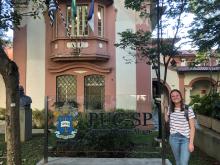 Sarah Slack, senior in Bioengineering and member of the 2019 Husky 100, is one of our first minors in Portuguese Language and Luso-Brazilian Studies.  Slack’s study of the language enabled her to earn the Foreign Language and Area Studies (FLAS) Scholarship and study abroad in São Paulo, Brazil.

Slack’s interest first came from personal experience. “My initial motivation for choosing Portuguese was the uniquely welcoming culture I had experienced while traveling with my father as an eighth grader and visiting his old exchange family in Brazil.”

Once she began her studies, she found that learning Portuguese and studying abroad complemented her study of bioengineering. “I quickly realized how valuable the Portuguese classroom environment was being different from my major classes, and was motivated to continue studying Portuguese beyond the single year I had planned for.”

Slack was able to find time in the schedule to pursue her studies with the help of her adviser: “my adviser and I determined I had space for a year of foreign language classes as a sophomore. Although I had taken some Spanish in high school, I chose to start over and learn Portuguese.” She added: “With the support and flexibility of my Portuguese professor, I took all two years of Portuguese and met the cultural class requirements of the Portuguese Language and [Luso-]Brazilian Culture minor in a way that allowed me to combine these interests similar to how I might do so in the future.”

Studying Portuguese at University of Washington enabled Slack to apply for, and earn, the FLAS scholarship. Receiving the FLAS scholarship enabled Slack to pursue summer studies in São Paulo, Brazil and to complete her coursework for the minor. “Without the FLAS-supported summer courses, I may not have been able to complete the minor requirements in addition to my major.”

Studying in São Paulo also allowed Sarah to experience the Portuguese language and Brazilian culture directly: “being immersed in the language and living with a host family improved my Portuguese proficiency level in a way that would not have been possible in the classroom.”

Slack is enthusiastic in encouraging others consider the minor: “If you’re interested in and excited about the Portuguese Language and Luso-Brazilian minor, go for it! When I decided to take Portuguese classes and declare the minor, I had no idea how I might fit the extra courses or combine them with what I was learning as a bioengineering student.”

The process of applying for scholarships and studying abroad, she says, will contribute to her future professional goals: “applying for scholarships to support immersive language learning abroad ultimately helped with both, allowing me to complete my minor over the summer and inspiring my future interest in conducting internationally collaborative research with Brazil.”