History in the Making: Life-long Portuguese Learners at UW 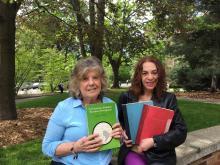 Charlene Souriano and Roslyn Cooper are among the most dedicated students in Portuguese at the UW and are life-long language learners. Charlene, who has a Spanish-Portuguese last name, took Portuguese for the first time in 1970 at the UW. The textbook used back then was a 1966 publication from the Modern Language Association (MLA) - featured in the picture. Charlene took two years of Portuguese, spent a summer abroad studying at the Universidade de Lisboa, and acquired a minor in Portuguese at the UW. She has had several Portuguese instructors from our department, including Marília de Biasi (1970-71); James Algeo, a former department chair (1971-72), Veleda Furtado (1985), Christina Zubelli (1999-2006 and 2014-2015), Kent Kinzer (2013-15), and Eduardo Silva (2015-2016). When reflecting on her most recent classes, Charlene says that they “have been more demanding and require more conversation abilities than before.” Her comment resonates with Roslyn Cooper’s experience. For Roslyn, the current classes are more interactive than the ones in the past.

Roslyn, known in the Portuguese classes as “Rosalinda,” was a graduate student in Romance Linguistics at the UW. She enrolled in her first Portuguese class in 1981. The book used then was A Grammar of Spoken Brazilian Portuguese by Earl W. Thomas, published in 1974 (featured in the picture). The class was taught by Cecilia Cartwright and consisted of a one-quarter class for graduate students who needed to pass a reading proficiency test in Portuguese. In 2014, after retiring as a French, Spanish, and Arts teacher from the Seattle Public School system, Roslyn started taking several Portuguese language classes at the UW, including the second year sequence and Portuguese 301. She has been taught by Christina Zubelli, Kent Kinzer, and Eduardo Silva. Rosyln explains that having more free time has allowed her to take such classes: “I enjoy the classes and am motivated to attend Luso-Brazilian cultural events which enhance my knowledge and appreciation of the richness of this language and culture.”

Portuguese has been an important language in Charlene’s life and it has offered more job opportunities to her than her degree in arts. Charlene worked as a tutor and translator in Portuguese for the Seattle Public schools for years, in addition to teaching from kindergarten to high school. For Roslyn, learning Portuguese has been an enjoyable activity and a way to connect with other cultures as well. For us at the UW, having Charlene and Roslyn in class has been a rewarding experience. They contribute to the class in many ways, especially by being role models of language learners and by bringing to class their vast world experiences. We couldn’t ask for more dedicated students!