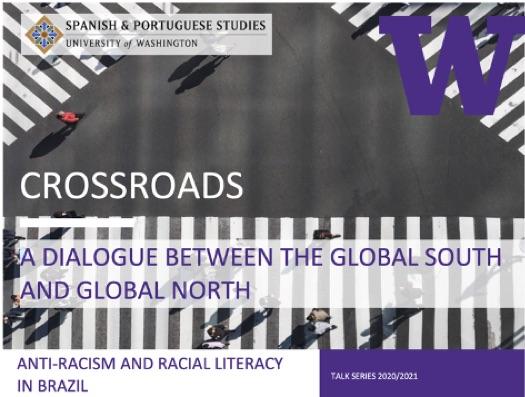 On Thursday October 29th, 2020 the Department of Spanish and Portuguese Studies and the Center for Global Studies hosted the event Crossroads: A Dialogue Between the Global North and Global South which in its first meeting examined the issues of race through a conversation about anti-racism and racial literacy in Brazil. The event featured two speakers: Henry M. Jackson School of International Studies Professor Jonathan Warren, and PhD Student of the College of Education Paulette Thompson. The conversation was moderated by Spanish and Portuguese Studies Associate Teaching Professor Eduardo Viana Da Silva. This event took place on Zoom and was well attended with almost 40 participants.

Professor Warren defines racial literacy as, “the skillset to be able to understand racism and the various ways it manifests […] and then coupled with that is the skillset to be able to respond in situations in which you identify racism that are challenging, upsetting, contesting racism.” Warren relates low racial literacy in the US among whites to a culture of color blindness which deals with race and racism by avoiding it or pretending it doesn’t exist. He explains that Brazil also has low racial literacy, but that it is spread more across races:

Especially if you juxtapose people of Indigenous or African descent in the US to those in Brazil. You see, sharp differences and racial literacy in which people of color in Brazil are roughly comparable to US whites and probably lower in part, because historically there has a weaker anti-racist movement in Brazil. (Warren 2020)

Professor Warren started researching in Brazil in the 1990s, where he says if he even implied racism existed in the country, he was faced with an incredible amount of pushback from academics and others. In his opinion, this is something that has come to change, “there are now academics, political parties, and ordinary folks who talk pretty freely about white supremacy in Brazil and are thinking through ways to combat and challenge it”

Thompson also experienced similar pushback when she first visited Brazil in 2003 with the goal of studying racism and comparative slavery between the US and Brazil:

Paulette Thompson explains that this is a reflection of the belief of racial democracy in Brazil, the idea that the spirit of being Brazilian is stronger than racial prejudice, that Brazil does not have racism and that Brazilians do not view each other through lenses of race. Issues of inequality are often seen as issues of class rather than race.

Steps to raising one’s own racial literacy include admitting that one is not unaffected by their own prejudices and confronting them. As well as engaging in anti-racist education through reading and engaging in discussion. An issue presented by Thompson on anti-racism education is that the onus is often put on people of color, “it becomes emotional labor that is not shared, that becomes a concern for me… everyone has to do the work,” said Thompson.