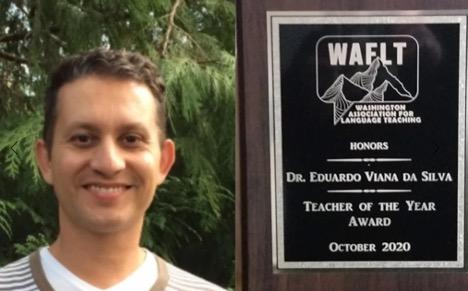 Eduardo Viana da Silva, Associate Teaching Professor in the Department of Spanish and Portuguese Studies at the UW, has received the 2020 Teacher of the Year Award from the Washington Association for Language Teaching (WAFLT). This award recognizes the work of language teachers in the State of Washington for their excellence in the teaching of world languages.

The WAFLT Association highlights on its website that this award "celebrates the promotion of cultural awareness, intercultural understanding, and diversity within the classroom and school communities." Commenting on Eduardo’s contributions in his home department, UW Spanish and Portuguese Chair, Donald Gilbert-Santamaría notes, ¨His efforts have been nothing short of extraordinary, providing students at the University of Washington with a unique opportunity to study in depth the language and diverse cultures of the Portuguese-speaking world.”

This year, WAFLT has given the award to a language teacher at the university level for the first time in the organization’s history, as this recognition has been traditionally given to language teachers in the K-12 school system.

Eduardo Viana da Silva’s recognition by WAFLT reflects his tireless work in promoting the Portuguese language and Luso-Brazilian culture since joining the Department of Spanish and Portuguese Studies at the University of Washington in 2015. He has coordinated Teletandem exchange projects with students in Brazil, supported students applying for Foreign Language and Area Studies (FLAS) Fellowships, led a STARTALK Portuguese and Spanish student program, directed Study Abroad Programs in Brazil, participated in a GenCyber 2020 Grant proposal to create a cybersecurity program for learners of Portuguese, and most recently, written an online Portuguese textbook, Bate-Papo: An Introduction to Portuguese using an OER (Open Educational Resource with a creative commons attribution license).

Russell Hugo, Assistant Director of the University of Washington’s Language Learning Center, is familiar with many of these projects, having worked closely with Eduardo for several years. Hugo praises Eduardo’s efforts ¨to create the best learning experience as possible for his students¨ as well as his commitment to ¨supporting the larger language learning community.¨ Hugo also highlights that “Eduardo is supportive and encouraging of other educators and all learners,” and that he “creates a welcoming, inclusive, kind but also pedagogically rigorous environment for all.”

During the award ceremony on October 9th, 2020, Eduardo expressed his gratitude to his colleagues at the UW and to UW students, as he recognized the privilege of being a language teacher in a very supportive community: “I am very humbled to receive this award. I was not expecting it at all.”

Eduardo was also the keynote speaker for the 2020 WAFLT Conference with a presentation entitled "Global Citizenship in the 21st Century Language Classroom," in which he explored the idea of promoting global citizenship through virtual exchange programs. He co-authored an article about this theme with his colleague from São Paulo State University (UNESP), Dr. Ana Biondo Salomão, in the Journal of Virtual Exchange. Click here to read the article.

This award from WAFLT is a testament to his commitment to language pedagogy as well as to his tremendous contributions to the Department of Spanish and Portuguese Studies and the UW community at large. As Gilbert-Santamaría observes, Eduardo’s “boundless enthusiasm for his work in the classroom, absolute dedication to his students’ academic success, and impressive leadership make him the driving force behind the unprecedented growth of our Portuguese Program in recent years.”

A full list of recipients for the Teaching of the Year Awards from WAFLT can be found at this URL: https://www.waflt.net/annual-awards