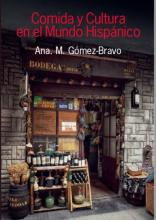 Food and Culture in the Hispanic World
Ana Gómez-Bravo created a class about Spanish food and culture a few years ago as a way to teach the language, but found no appropriate textbook for the material — so she wrote one herself.

Gómez-Bravo is a professor in the Spanish & Portuguese Studies Department. Her book “Comida y cultura en el mundo hispánico” — “Food and Culture in the Hispanic World” — was published in October by Equinox Publishing.

The book is designed to serve advanced high school students and those taking third- and fourth-year Spanish at the university level. It’s the first such textbook to use food as the starting point from which to help students learn the language and acquire cultural literacy.

Gómez-Bravo, who has taught Spanish for years and has led study-abroad student tours to Spain, said the book’s inspiration flowed from both of those experiences.

“Teaching culture through the lens of food enables the discussion of many different topics in the classroom,” she said, “from literature and social and cultural issues to the environment, religion and politics.

“Food is a common interest that all students share and understand is an important part of any culture. The book allows them to learn more about all of these important topics while discovering the world around them in ways that they find surprising and engaging.”

Each chapter has a reading on a key topic — Aztec food practices, for instance — followed by shorter sections covering “concepts or artifacts” related to the main topic. All chapters include color photographs, literary texts and suggestions of video, audio and web links where students can learn more.

This is the third book by Gómez-Bravo; her first two were about another specialty of hers — the study of 15th century poetry.

An accomplished cook in her own right, Gómez-Bravo said in a 2012 departmental faculty profile that she owns hundreds of cookbooks. She said when she moved to the UW from Purdue University in 2012 she got rid of many books, “but all the cookbooks came with me. You never get rid of a cookbook.”

NB:  SPS shared this article on our Facebook page and it was the most popular article in 2017. Comida y cultura en el mundo hispánico was published in October by Equinox Publishing.  Read the original UW News article for more.