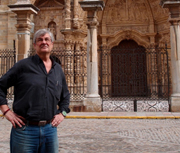 This has been a big year for Spanish and Portuguese. In the fall we launched our first study abroad program in Cusco, Peru, and early in the winter quarter we admitted the first incoming class to our new PhD program. Since January we have sponsored a photo exhibit, several lectures, an open sound check with a Grammy Award winner, and a film screening. All of these events were made possible through your generosity. Read Tony Geist's complete letter

Aaron Rux: Getting Creative in Madrid

Aaron Rux (2004) has lived in Madrid for the past five years, teaching English while buildling a career as a composer of songs and soundtracks for films, advertisements, and TV shows. He's also part of a humor collective that recently shot a feature-length film. He credits SPS chair Tony Geist with "teaching me the importance of time and patience to develop my craft and mature as an artist," particularly during the year he spent with Tony as a UW student in the Cadiz study abroad program. Read more

When Associate Professor Suzanne Petersen retires in June, she'll be as busy as ever. “I am retiring so that I have time to pursue my research,” says Petersen, a medievalist whose specialty is ballads. Petersen explains that singing and storytelling were the only available form of entertainment in traditional societies, and they served as an opportunity to explore and even challenge norms inherited or favored by those in power. As the modern world encroached, ballads began to lose their viability, appeal, and ultimately, their relevance. "This is why documenting what little remains of a dying tradition is so important," she says. Read more

She's an honors student now, but Ramana Marshalla's education has not always been smooth sailing. A straight-A student in high school, personal issues led her to drop out during her senior year. While waitressing at a Mexican restaurant in a Mexican-American community for several years, she became interested in Spanish, eventually attending an intensive Spanish program in Seville, Spain. It was then that she decided it was time to apply to the UW. "I began to accept that the traditional route is not always best, and certainly was not for me," she says. Read more

Suzanna Martinez smiles when she talks about “the beauty of a liberal arts degree.” As Martinez discovered along the road to her current job as Academic Counselor for the Spanish and Portuguese Division, there is no limit to what a liberal arts graduate can do. Her personal understanding and first-hand experience of this is what enriches Martinez’s work. “I encourage Spanish majors to open their minds to many possibilities,” she said. “Teaching and translating and interpreting are good paths, but they are just a few of the possible careers available to our majors.” Read more

Sixteen students are packing their bags and preparing to spend four weeks in Quito, Ecuador this summer through the UW’s Quito study abroad program, now in its tenth year. Jorge González, lecturer and general director of the Quito Program, responded ten years ago to the Dean’s offer to faculty to start a study abroad program anywhere they thought would be of value to students. “My intention in choosing Ecuador,” explained González, “was to expose students to what it means to be in a Mestizo country and to learn how the combination of European and indigenous blood, language, culture and religion manifests in modern society." Read more

We would like to highlight two special funds available to help students of the Spanish and Portuguese Studies Division accomplish study-abroad and career-development goals.

The David William Foster Fund has supported advanced language training for one graduate student each year since 2005. Normally it has been used for training in Spanish in Oaxaca, but in 2011 it was granted to a department graduate student from Spain to work on her English in Seattle.

Emily Thompson, graduate student and teaching assistant (featured in the Student Spotlight article in the Winter 2013 newsletter), utilized funds in the summer following her first year in the MA program to travel to Oaxaca where she studied Spanish language and culture.

David William Foster, Ph.D., one of the department’s most distinguished alumni, graduated from UW in 1964. He then became a professor at Arizona State University and established this fund in 2005.

Gary Schmechel entered the division's graduate program in fall 2004 to resume his studies of Spanish and Latin American literature after a long hiatus. He was a gifted reader and translator of poetry in Spanish. Upon his untimely death, his family and others donated funds to be used to support a graduate student working on poetry translation.

In October 2012, Emily Thompson, a graduate student in the MA program in Hispanic Studies, was given an award from the funds to attend the American Translators Association Conference in San Diego.

To learn more about these funds and to find out if you qualify, contact Department Chair, Anthony Geist: tgeist@uw.edu.

THE FRIENDS OF SPANISH AND PORTUGUESE STUDIES

Changing demographics nationally and locally lend a new urgency to our mission to study language, literatures, and cultures. Join us today as we strive to create knowledgeable and compassionate citizens, and foster in them tolerance, respect for cultural diversity, a capacity for critical thinking, and a sense of themselves as responsible members of a global community.

The Friends of Spanish and Portuguese Studies Fund is an unrestricted, discretionary resource. These funds are vital in sustaining scholarships, undergraduate research, faculty development, and the many cultural events the department sponsors each year. Your gift will provide valuable resources for the department and its students to advance the Spanish and Portuguese languages and literatures and cultures of Spain, Portugal, Latin America and US Latinos.

Checks can be mailed to: UW College of Arts & Sciences, Attn. Jessica Carter, Box 354882, Seattle, WA 98195. Please make checks payable to the University of Washington and indicate the “Friends of Spanish and Portuguese Studies Fund” in the reference line. Alternatively, if you wish to contribute by credit card, you can do so on-line by going to the UW Foundation webpage.

León Bensadon, longtime friend and colleague of Spanish and Portuguese Studies Division, passed away on November 4, 2012. Donations in León’s memory can be made to the “León Bensadon Memorial Scholarship Fund.”  This new fund pays tribute to León’s passion for his Sephardic heritage and the students he loved to teach.  It benefits UW undergraduate or graduate students interested in working on Sephardic and Ladino studies.  Checks can be mailed to:

Please make checks payable to the University of Washington and indicate the “León Bensadon Memorial Scholarship Fund” in the reference line.  Alternatively, if you wish to contribute by credit card, you can do so by going to the UW Foundation webpage set up for this fund.