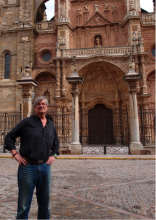 I write from a train crossing la Mancha, on my way to a Poetry Festival in Granada. It has been a long, wet winter in Spain, and the fields surrounding the olive groves, studded with grape vines and lavender plants, are deep green.

This has been a big year for Spanish and Portuguese. In the fall we launched our first study abroad program in Cusco, Peru, and early in the winter quarter we admitted the first incoming class to our new PhD program. Three students have accepted our offer of admission and we await their arrival next fall with great enthusiasm.

The people featured in this issue of the newsletter have all followed different roads to and from the Spanish major. It has led alumnus Aaron Rux to the world of the alternate music and film scene in Madrid, while Ramana Marshalla’s detours have enriched her understanding both of herself and the Hispanic world. For Suzanna Martinez all roads seem to have led her to the position of Academic Counselor, while Suzy Petersen will continue in the pursuit of Spanish ballads, both toward digital horizons as well as in Spanish villages and byways.

One of the distinctive hallmarks of the department is our commitment to making the cultural richness of Latin America, Spain and US Latinos available to a broad audience. Since January we have sponsored a photo exhibit by Spanish Civil War photographer Agustí Centelles, with an opening lecture by Professor James Fernández of NYU; and a lecture by renowned Sephardic scholar Andreé Brooks on Doña Gracia Nasí, “The Woman who Defied Kings.” In April we made an open sound check with Grammy Award winner Lila Downs available to our students, while later that month documentary filmmaker and Director of the New York Instituto Cervantes, Javier Rioyo, screened his film on Federico García Lorca. Finally, a few days ago we co-sponsored a lecture by the forensic anthropologist Alfredo González Ruibal on the “memory wars” in contemporary Spain. These events are made possible through your generosity. Please consider contributing to SPS studies.

It is with considerable sadness that we bid farewell to two longstanding members of our faculty who are retiring after many years of service to Spanish and Portuguese Studies. Associate Professor Suzy Petersen is the longest serving member of our department, having been here for nearly 40 years. In addition to being our historical memory, Suzy’s work as scheduler is invaluable. She has been exquisitely attentive to the needs of students and faculty as she shifts sections and faculty like a Chinese puzzle. She has also been the Executive Director of the NW Cádiz Program since the retirement of Farris Anderson ten years ago. What I’ve never understood is how she also has found time to be one of the leading scholars of Spanish medieval and Renaissance balladry. Her website, Pan Hispanic Balladry, is the gold standard and a necessary resource for all scholars in the field.

Fortunately Suzy will be returning to the department for a few years under a post-retirement hire-back arrangement.

Joan Fox will be retiring in December after long association with the department, first as a student in our MA program and later as an instructor. Currently she is a Lecturer and the coordinator of the 100-level Spanish program. Joan is known for her excellence in teaching, her unflagging good spirits, and her willingness to always put the good of the department before her own interests. I would like to emphasize particularly her service as head of the Events Committee, in which she has taken a key role in organizing our annual Holiday Party as well as the complex logistics of the department graduation celebration. Under her leadership, our graduation event is arguably the best in the College of Arts and Sciences.

We will miss Suzy and Joan enormously, and to be honest I don’t know what we’ll do without them. We continue to mourn the passing of Lecturer León Bensadon, who died in the fall.

Our graduation speaker this year, and recipient of the Luis Fernando Esteban Public Service Award, will be Al Maimon, a distinguished member of the Seattle Sephardic community. Al is a direct descendent of the medieval Spanish Jewish philosopher, Maimonides. This is part of our outreach to the Seattle Sephardic community, the second or third largest in the country, an initiative on which we are collaborating with the Jewish Studies Program.

Wishing you all a restful and productive summer, I sign off until next fall.