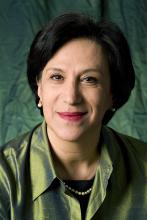 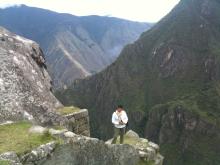 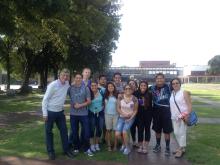 María Gillman with students at UNAM 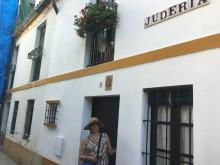 After 32 years as a member of the faculty, María Gillman, founder of the Spanish Heritage Language program, has retired from the Department of Spanish & Portuguese Studies at the University of Washington.  Her retirement was effective at the end of winter quarter.

Joining the department in 1990, Gillman noticed that her classes had students who were fluent in Spanish but had no formal education in the language, and in 2000 began teaching SPAN 314 as a course for heritage speakers of Spanish, a curriculum that has since expanded to a four-course track. Gillman served as the Director of the Heritage Language program from its establishment until 2021.

Associate Professor Ana Fernandez Dobao, Director of the Spanish language program at University of Washington, praised Gillman for establishing and developing the Spanish Heritage Language program: “María Gillman, a pioneer in her field, paved the way for heritage language teaching in the state of Washington when she first created the UW Spanish Heritage Language Program more than two decades ago. Under her leadership, this has become a strong and vibrant program that continues to serve as a model, and inspiration, for heritage language teaching across all minority languages at both the K12 and higher education levels.”

Gillman outlined her objectives for heritage language courses in her teaching philosophy: “I wanted to create a safe and comfortable environment where my students could use the language spoken at home without the fear of being made fun of because of the language dialect they spoke.” In class, her objectives were language maintenance, biliteracy and addressing identity issues. Gillman valued and appreciated the differences in her students: “I always say, my students are like Yakima valley apples: each one of a different kind.”

One of Gillman’s students, Ricardo Ruíz, poet and author of the recently-published We Had Our Reasons/ Teníamos Nuestras Razones, spoke highly of his former professor: “María Gillman is amazing because she set up this program for students who understand [Spanish] verbally but lag syntactically.” The impact of Gillman’s courses extended beyond language instruction. “It was amazing to hear someone say that ‘Spanglish’ isn’t bad; it’s an intersection of personality…[hearing] it’s OK to just be who you are was powerful.” Ruíz also brought up Gillman’s focus on identity: “[being a heritage speaker] isn’t just about language, it’s about identity.” Ruíz praised Gillman for the tremendous impact she had on his life. “I can never say thanks enough, María Gillman changed my life personally and professionally.”

Gillman had a professional impact on other language instructors. As detailed in a 2015 profile piece, Gillman’s work influenced instruction outside of the university: “I became a mentor for high school and middle school teachers who had heard about my program. They observed my classes and consulted with me about program implementation, textbooks, techniques and methodology.”

This influence extended to her colleagues in higher education as well. Dr. Alejandro Lee of Santa Mónica College attested to the influence Gillman had on him earlier in his career: “While I worked in [Washington] state, Prof. Gillman was my most reliable, generous, and experienced mentor, collaborator, and colleague. She opened her classroom and library and her heart to all teachers and me and helped guide us professionally.”

In her work in heritage language, Gillman said she saw herself as a “bridge between her students and the community” and worked to connect students with the Spanish-speaking community outside of UW.  One way she facilitated this was as Director of Department Experiential Learning, a position she held from 2008 to 2021. Through experiential learning, students could find themselves working with organizations that serve the local Spanish-speaking community, including the Mexican Consulate.

In addition to her work in the classroom and the community, Gillman established two study abroad programs, exploration seminars in Mexico and Spain. Of the former, Gillman said, “One of my goals was for my students to experience, observe and live with other Mexican families and to see that all Mexicans are not cut from the same cloth”. This experience invited students to evaluate their identities. “These students, who had previously identified themselves as Mexican, began questioning their Mexican, American and hyphenated identity as they saw that in some ways they were more culturally American than they had thought.”

Of her time in the department working with heritage language students, Gillman said: “I feel very privileged to work with [them], they are resilient, daring and I’m always amazed to see them move with grace between worlds.  I love to see when they realize that they don’t need to choose between worlds, that they are not this or that, but rather this and that.” Her experience with students informs this advice to other instructors: “Just as my students inspired me to do more research and learn new methodologies on teaching Heritage students, I encourage my fellow faculty and instructors to spend more time listening to their students, identifying innovative ways to teach and building community.”