In her work with Heritage Learners, Professor Maria Gillman observed a startling phenomenon. “When they visited, for example, Mexico, they went only to their grandparents’ village, their grandparents’ home. That was their entire impression of the country of their ancestors,” she said. “They didn’t know about the ‘other’ Mexicos,” said Gillman, who is Mexican.

In order to help her students gain a broader view of their heritage, in 2009 Gillman created a Study Abroad Exploration Seminar. “I saw value in exposing Heritage Students to the history, architecture, education and culture(s) of their heritage country,” explained Gillman.

¡Al Norte!: Immigration to the United States from and through Mexico was designed primarily, but not exclusively, for students of Mexican descent. “Because the students or their parents were immigrants, I wanted them to understand that migration is not a unilateral issue or an exclusive phenomenon in the U.S. or the Americas,” said Gillman, citing Chinese Heritage Learner scholar, He, who said, “Identity formation and transformation is symbiotic with {heritage language} development.”

During the month-long seminar, students visited four Mexican states: Oaxaca, Chiapas, Michoacán and Mexico City, each of which has something different to offer in terms of the long-standing migration relationship between Mexico and the U.S. Through a combination of homestay, daily classes, readings, journaling, visits to archeological sites and field work, students gained a broader understanding of Mexico as a country of varying classes, traditions, and histories, dispelling and/or enriching previously held notions about their heritage country. In Mexico City, students met with professors and graduate students at the Universidad Nacional Autónoma de México (UNAM), one of the top Latin American universities, to discuss issues of identity and migration as well as the excellent public education system in Mexico. 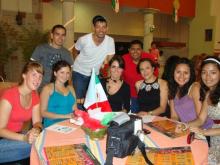 The capstone assignment was a digital narrative of students’ newfound understanding of the experience of migration. Here are two fine examples of the student-produced videos:

And here is a third video produced by Marilú Cruz who visited her family in the village of her younger years: https://www.youtube.com/watch?v=UNhuEaYA5-8

“One of my goals was for my students to experience, observe and live with other Mexican families and to see that all Mexicans are not cut from the same cloth,” said Gillman. “These students, who had previously identified themselves as Mexican, began questioning their Mexican, American and hyphenated identity as they saw that in some ways they were more culturally American than they had thought.”

Two years later, a second Exploration Seminar called Spain, Europe’s Revolving Door, allowed Mexican Heritage Students, to travel to Spain where immigration was a new phenomenon. “Students observed Spain’s growing pains as, for the first time in its history, Spain received thousands of immigrants from South America and Africa,” said Gillman. “They learned about Spain’s practices in regards to immigration and the policies the Spanish government had established to deal with this new social order,” she added, “and to compare Spain’s policies with those of the United States.” Gillman noted, “Students realized that the topic of emigration is not unique to Mexico and the United States, but rather a global issue/challenge.” 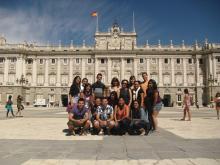 The group spent two weeks in Salamanca and two weeks in Madrid, experiencing homestays, visiting NGO’s, migrant organizations and the office that dealt with immigration.

In addition, students recognized traits and characteristics indicative of the Spanish influence on Mexico, gaining a deeper sense of their heritage.

Gillman is currently preparing for a third exploration seminar, Al Norte!: Migration From and Through Oaxaca planned for Autumn 2015. The course will look at aspects of the Oaxacan immigration phenomenon, including the transit of Central Americans through the transit state of Oaxaca to the United States. Homestays, fieldwork and excursions will expose students to the high level of organization, social commitment and family-centered focus of migrants and non-migrants alike.

“My hope is to develop a study abroad program for an entire term in Mexico so Heritage Speakers could experience Mexico for a longer period of time,” said Gillman. “There are very few programs for heritage speakers to study abroad. I want UW to be one of the first universities to establish such a program.”