Mapping a Polycentric Republic of Letters in Eighteenth-Century Mexico 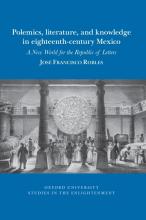 Book Cover for Polemics, Literature, and Knowledge in Eighteenth-Century Mexico: A New World for the Republic of Letters
View gallery

The following appeared on the Liverpool University Press Blog on April 14, 2021:

José Francisco Robles is the author of Polemics, Literature, and Knowledge in Eighteenth-Century Mexico: A New World for the Republic of Letters, the April volume in the Oxford University Studies in the Enlightenment series. As a study of intellectual history, his book analyzes the configuration of the Republic of Letters in eighteenth-century Mexico through the examination of scholarly communities and literary production directly involved in transatlantic polemics on knowledge production in the New World and debates on philosophical systems of learning.

The viceroyalty of New Spain––whose territory largely corresponded to that of present-day Mexico––was, during the eighteenth century, the most important intellectual hub in Latin America and a place of extraordinary scholarly endeavors. During this period, Mexico’s viceregal society saw the publication of its first regularly-issued newspapers, its first biobibliography of Mexico’s written production, its first scientific periodicals, and one of the first––if not the first––science fiction works of the region. Despite these achievements, the literary production and intellectual life of eighteenth-century Mexico has been overlooked. Why? Perhaps one of the reasons lies in the need for scholarship on this era to go beyond the analysis of the traditional models and genres of the Hispanic Golden Age studied by specialists of the early modern period. Given that literatura was an umbrella term that, during the eighteenth century, extended to almost the entire universe of writing, I think that the literary production of this time in Mexico is best approached as the product of the complex historical, scientific, philosophical, and religious inquiry that marked the era. Viceregal scholars, the practitioners of this literature, were polymaths that notably held a wide array of scholarly interests.

Polemics, Literature, and Knowledge in Eighteenth-Century Mexico: A New World for the Republic of Letters aims to fill this critical void by analyzing how eighteenth-century Mexican writers sought to establish their local literary republic’s place within the global community of learning. These individuals formed scholarly networks, engaged in the historical exploration of the past and present, and configured new epistemological approaches to literary production inspired by enlightened ideas. Polemics of different kinds, as suggested in the title of my study, played a crucial role in the formation of scholarly circles. One of the first of such controversies was related to the lack of recognition by European scholars of the intellectual capacities of those born in the Americas. In order to debunk existing prejudices and to be considered part of the res publica literaria, Mexican scholars were eager to showcase their intellectual attainments to Europe. For these scholars, the Republic of Letters was polycentric, with one of its centers located precisely in viceregal Mexico.

Many literary works of this era not only utilized scholarly polemics as unique points of departure, but also gave rise to new controversies. Beyond Mexican scholars’ efforts to defend the intellectual capacities of fellow inhabitants of the New World, these writers, especially during the last quarter of the eighteenth century, were involved in internal, epistemological battles related to the practice of knowledge. My book not only highlights the efforts of scholars in eighteenth-century Mexico to construct a polycentric Republic of Letters in order to receive recognition from their European peers, but also demonstrates the extent to which the intellectual realm was dynamic within the viceroyalty.

As such literary debates on knowledge attest, several intellectual circles coexisted in the viceroyalty that, due to their different characteristics, grew increasingly distant over time. In the works of some Mexican authors, there existed two chronologically distinct Republics of Letters, that from the pre-Columbian era and that which emerged after the Spanish conquest. In the late eighteenth century, however, several publications attested to the simultaneous existence of at least two distinctive groups of scholars, one that was old and pertaining to scholasticism––the philosophical-educational system traditionally ruling the world of scholars––and another that was new, or modern, and influenced by enlightened ideas. In other words, the seemingly stable idea of the Republic of Letters in the mid-eighteenth century was to fall apart in the following decades, when Enlightenment-inspired criticism, opposition to ancient authorities, and philosophical and scientific development concerned with social realities put into play innovative approaches to knowledge and the practice of religion in the viceroyalty.

With Polemics, Literature, and Knowledge in Eighteenth-Century Mexico: A New World for the Republic of Letters, I invite those scholars devoted to the study of eighteenth-century cultures to engage in an examination of a less-explored scholarly territory and its networks, and to think about how it was heterogeneously constructed by many-sided polemics and debates manifested through a broad range of literary works.

Polemics, literature, and knowledge in eighteenth-century Mexico is part of the Oxford University Studies in the Enlightenment series, published in collaboration with the Voltaire Foundation, University of Oxford.