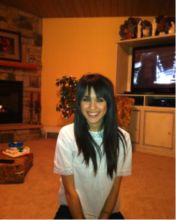 Angela Durán Real, Ph.D. student in Spanish & Portuguese Studies’ newly established program, is a busy woman as she begins the second of five years toward her doctorate. In addition to her substantial academic workload, Durán Real is an SPS Teaching Assistant and a lecturer at Seattle Pacific University. Previously, she lectured at UW Tacoma and worked for the Language Link in Seattle, teaching Spanish to grade school students.

Durán Real is from Azuaga, a small town north of Sevilla. She earned her undergraduate degree in Journalism and Popular Culture Studies from the Universidad de Sevilla. After completing her masters in Hispanic Studies at the UW, Durán Real planned to move on to another U.S. school for her Ph.D. But when UW resurrected its program, she decided to stay. “I stayed because of the faculty, the department and the opportunity to continue working with Tony Geist,” she said of their collaborative work on the rise of new subjectivities after national traumatic events such as the economic crises in 2001 Argentina and 2008 Spain.

Durán Real’s graduate focus is on trauma theory and affect theory in literature, specifically stemming from the years of dictatorships in Spain and Argentina.

Durán Real is interested in literary expressions of emotion. “What touches me most is the ability to transform a personally experienced traumatic event into literature,” she said, “specifically the question of how one accesses memory, so often damaged by trauma. “How are we able to narrate a traumatic event despite its impact on both our mind and our body?”

As an undergraduate, Durán Real was torn between literature and psychology. Now the two are merging and Durán Real becomes animated when she talks about her research. Her passion for the subject matter and its psychological ramifications is clear.

“Spain and Argentina have dealt differently with the trauma of dictatorship,” said Durán Real. “In 1976 Argentina, the military focused on killing the young people who wanted to bring about change and social justice. 30,000 people disappeared. When social movements such as Las Madres, comprised of the mothers of these young people, arose, they were also attacked by the dictatorship,” she explained. “A lot of literature, in particular, memoir, flourished around this.”

By contrast, after Franco’s death in 1975 Spain, the democratic government agreed on a pact of silence, promising never to talk about it, never to revisit that part of history. As a result, the trauma has not been dealt with. “Burying trauma offers little chance for recovery,” said Durán Real. “Democratic governments have not addressed this chapter,” she said, adding that her elderly grandparents refuse to talk about their experience. “We are losing the chance to learn and to recover.”

Durán Real is pleased with the Ph.D. Program thus far. “The UW program has something new to offer doctoral students,” she said. “Most faculty members are open to students’ ideas, giving us an opportunity to contribute to the betterment of the program and the department as a whole.”

“I feel totally supported,” she added. “Tony (Geist) is a great mentor. I also love working with Leigh Mercer, a successful academic who always makes time for you and makes you feel heard and comfortable.”

“The Public Scholarship Certificate is important in that it encourages academics to take their jobs outside of academia,” said Durán Real, who appreciates the freedom to take classes outside of SPS that round out her studies with other areas and disciplines. “I took a very interesting seminar with Kathleen Woodward of the Simpson Center for the Humanities, which enhanced my field of study.”

Following her PhD, Duran Real, who got married in August, will stay in the U.S. Her plan is to apply for academic jobs and to teach.