Eat, Live, and Study in Spain this Summer! | Study Abroad Course at the UW León Center 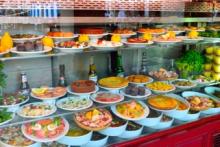 This summer, the Division of Spanish & Portuguese Studies is offering a 15-credit course at the León Center in León, Spain. Food and Culture in the Hispanic World will be taught by Associate Professor, Ana Gómez Bravo, from June 21 to August 23, 2014.

The course will explore the role food plays in Hispanic cultures and how that role has changed over time. Students will learn how biological and cultural exchanges between Spain (Europe) and Latin America have affected these two regions. They will explore the culture of food in the Hispanic World, taking advantage of being in Spain to study the material aspects of food. “We will look at ingredients and their sources, explore urban and rural markets, and analyze local food culture in the home and public spaces,” said Gomez-Bravo. “Foods and cultural practices will be traced from their roots (prehistory, in the case of Spain, and pre-Columbian times) to the present, and we will take several trips, including one to the Basque Culinary Center in San Sebastián.”

While researching both of her published books, Gómez Bravo, an accomplished cook, discovered abundant references to food, which caught her attention from both a personal and professional standpoint. Gómez Bravo, who specializes in the 15th century noted that in the Inquisitorial records, there was an obsession with what people ate, with the ingredients used in preparation and even who was present during consumption. Initially a way to ascertain whether converted Jews or Muslims were still adhering to their former dietary laws, these methods slowly made their way into the cultural cooking of Spain and Mexico. “Food consumption morphed into an understanding of racial and ethnic differences,” explained Gómez Bravo.This discovery led her to pursue her other specialty: Nutrition, writing and culture: the bio-cultural understanding of ethnic difference, in which she completed a one-year fellowship while at Purdue.

The UW León Center is open to campus-wide departments as well as institutions outside the UW that wish to use the center for study abroad programs, academic research, conferences and cultural events. “The goal of the center,” explained Lani Phillips, Director of Program Development of the León Center, “is to create programs from a breadth of disciplines, as opposed to exclusively Spanish studies, that incorporate the local environment and community.”

Anthony Geist, Executive Director of the León Center, said, “We aspire to much more than simply having our students show up, stay for a while and then depart. Rather, the Center actively seeks to engage with the local community and to be an important resource for the city and region.”

Geist, who is also chair of the Spanish & Portuguese Division at UW, said of Gomez Bravo’s contribution to the division, “Not only has Ana helped to keep alive a long and distinguished tradition of Spanish Medieval Studies alive, but she has also opened up new avenues of scholarship in the fields of material culture and food and culture."