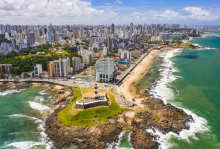 Our Portuguese content courses focus on  aspects of the Portuguese-speaking world through culture, literature, documentaries, cinema, music, and social media. We make an effort to invite guest speakers to the classes whenever possible, including artists, writers, educators, and activists. Certain courses are cross-listed with The Henry M. Jackson School of International Studies. Courses can be counted towards the elective classes for the Minor in Portuguese Language and Luso-Brazilian Studies and offer VLPA or I&S credit. Diversity credits can be added under request.

PORT 310 focuses on works of literature from Portuguese Speaking Africa, Brazil, and Portugal. The course is designed as an exploration of different aspects of citizenship and social issues in some of contemporary and 20th century literature from Mozambique, Angola, Brazil, and Portugal. The course content focuses on romances and short stories in addition to documentaries and interviews with the authors.

PORT 365/JSIS A 365 examines the cultures of Brazil, Portuguese-speaking Africa, Asia, and Europe within the framework of cultural studies theory. It follows an interdisciplinary approach, drawing from readings, audio files (radio), films and documentaries in history, literature, arts and performances, anthropology, among others, and focuses on selected cultural aspects and countries. Taught in English.

"From Samba to Hip-Hop: Brazilian Society through Music", an edition of PORT 365, will look at several cultural representations of Brazil and other Portuguese-speaking countries through music, including genres as samba, choro, tropicália, maracatu, and funk, among others. Most of the course work will focus on Brazilian society and history through music. We will also study some of the musical genres from Portugal, Angola, Cape Verde, and Mozambique and its historical and cultural aspects as well.

PORT 366/JSIS 366 is offered as a language trailer (language track) in Portuguese primarily for students enrolled in PORT 365/JSIS A 365: Mapping Luso-Brazilian Cultures. In this 2-credit language course (PORT 366/JSIS 366), students will read a variety of texts in Portuguese from Brazil, Portuguese-speaking Africa, Asia, and Europe. In addition to the readings in Portuguese, students will watch short videos, documentaries, and films also in Portuguese. The main goal of this class is to give students the opportunity of improving their language abilities in Portuguese in connection to the study of Luso-Brazilian cultures. In order to register for this class, students need to have taken PORT 201 or to have at least an Intermediate-Low level of proficiency in Portuguese according the 2012 ACTFL (American Council on the Teaching of Foreign Languages) Guidelines. Please, consult the instructor for a language proficiency exam if needed. This class is taught entirely in Portuguese.