Tének: Images of a Language and its Culture 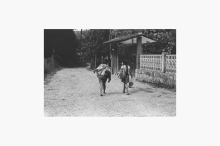 Image Shared in Coronado’s presentation of a remote Tének Community

On Thursday, February 4, 2021, the UW Spanish and Portuguese Studies department hosted the second event within the series Crossroads: A Dialogue Between the Global South and Global North. While the first event encompassed anti-racism and racial literacy in Brazil, this second event was focused on the linguistic and cultural history of Tének, an indigenous language in Mexico spoken in the states of San Luis de Potosi and Veracruz. The event, titled “Tének: Imágenes de una lengua y su cultura” [Images of a language and its culture], was moderated by SPS Assistant Professor Francisco Robles and featured guest speaker José Coronado, linguistic researcher and professor. The conversation took place on Zoom, allowing for the nearly 50 participants to join from all over the world, including Argentina, Mexico, and the U.S.

Professor Coronado began his talk by explaining the origins and linguistic features of Tének before then discussing the culture as analyzed through the oral literary tradition. Tének originates from the Mayan family of indigenous languages and has three varieties. According to census reports over the past twenty years, the number of speakers of Tének has been estimated to grow steadily, although Coronado problematized this and other such estimates by signaling errors in the data as well as highlighting the fact that researchers currently find fewer and fewer speakers. He used these reporting errors to talk about the challenges that indigenous languages often face in Mexico, a theme that resurfaced throughout the talk as he discussed the lack of bilingual schooling and the persistence of a colonizing mindset that indigenous peoples still encounter today. He also touched upon Tének’s written rules, recently published in 2018, which he described as an effort dedicated toward standardization of the language.

The second half of the presentation focused on the oral tradition of Tének; Coronado introduced this topic through a theoretical lens by talking about how “la lengua representa la vida misma de los pueblos” [language represents the very life of a community], providing insight into what he calls the “cosmovision” of the people, a vision which takes into account civilian life, agriculture, religion, family matters, etc. The importance of this cosmovision, passed down through language (for example, through oral tradition), is that it provides insight into ancestral ways of being and, to a certain extent, encodes the changes that the culture has experienced throughout the periods of both colonialism and independence; after all, the fact that indigenous languages still exist, including Tének, is a testament to the peoples’ resistance to colonialism itself and to the colonizing mindsets still prevalent today in efforts to integrate indigenous cultures into the dominant society --in other words, the language itself is proof of their fight to preserve both culture and identity.

Part of Coronado’s research focuses on how myths reflect the Tének cosmovision. During the event, he introduced one such myth, “El alma de la sal” [The soul of salt, or “La abuela de la sal” in another version; Salt’s grandmother]. This myth, passed down orally through generations, tells the story of the origins of salt, a fable that reflects the historical importance of salt within Mayan culture; this importance stemmed from the ritual use of salt to appease deities in conjunction with the booming salt industry of the Mayan classical period.

My takeaway from the presentation rests in the fact that oral stories provide insight into the cosmovision of indigenous culture, in this case that of Tének; that is, language itself serves as the primary source of knowledge into Tének’s rich past, present, and future. The event ended with a series of photos taken of a remote Tének community and a question and answer session, during which a colleague of Coronado (and native speaker of Tének) shared with the audience his experience translating between Spanish and Tének. For a community with such a rich linguistic heritage, translation, talks like Coronado’s, and the preservation of myths like that recounting the origins of salt all provide opportunities to pass the traditions of Tének on to subsequent generations.

Link to Zoom Recording of Event