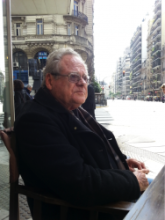 Dr. David William Foster, Faculty Head of Spanish and Portuguese and Regents Professor of Spanish at Arizona State University, and University of Washington Alumni, passed away June 24 at the age of 79.

Born September 11, 1940 in Seattle, Washington, Dr. Foster grew up in the Wallingford neighborhood and attended University of Washington from 1958 to 1964, earning a BA in Spanish, a Masters in Spanish and Romance Linguistics, and a PhD in Romance Languages and Literature. Moving to Arizona in 1966, Dr. Foster embarked upon a 54-year career at Arizona State University (ASU).

Dr. Foster’s research centered on urban culture in Latin America with an emphasis on gender and sexual identity, women’s history and Jewish culture. Of particular focus to Dr. Foster was Buenos Aires, Argentina and its influence on all aspects of social, political and cultural life in that country.

During his long career, Dr. Foster, according to his CV, published 53 books and produced numerous articles and translations. He earned several awards, including the 1989 ASU Graduate College’s Outstanding Graduate Mentor, 1994 Researcher of the Year from ASU Alumni Association, was the 2000 Recipient of the Armando Discepolo Prize, a 2010 Lifetime Achievement Award by the Centro de Narratoloia, Argentine National Library, and in the 2014 Victoria Urbano Academic Achievement Award, for lifetime achievement.

His impact was not limited to his work at ASU. In 2005 at University of Washington Dr. Foster established the David William Foster Fund, which supports advanced language training for one graduate student each year in Oaxaca, Mexico.  Asked in 2015 about the fund, he explained that “[d]uring my six years at UW, I received unstinting, unwavering support from the department…I could never have completed my program of studies without the support and assistance I received, both from the University of Washington and various scholarship sources…and I vowed to give back when I was in a financial position to do so.”

In a 2015 article by ASU, George Justice, Dean of Humanities in the College of Liberal Arts and Sciences at Arizona State University, described Foster as “one of the leading humanists at ASU, and, indeed, a national leader in the study of Latin American literature and culture.” Foster said that the “Humanities is all about the description of the human soul and the life that the soul lives.” Judging by his career, research, and the lives of others he influenced, the soul of Dr. David William Foster lived a long and impactful life.

An obituary for Dr. Foster was posted on Legacy.com.  A memorial service is currently planned for September 11, 2020 at Brophy Chapel in Phoenix, Arizona.

This version has been updated from the original.