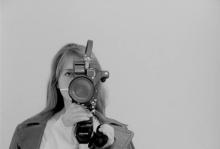 Brianna Salinas, a Masters student in Spanish & Portuguese Studies, is connected with the new Translation Studies Hub run through the Walter Chapin Simpson Center for the Humanities.

Salinas lived for two years in the autonomous community of Castilla y León in Spain, first studying abroad with SPS and then working as an English language instructor with The North American Language and Culture Assistants, or Cultural Ambassadors, program, also known as Auxiliares. While in León, Salinas was cast in a film after meeting local filmmaker Alberto Taibo, who cast Salinas in the title role of Leni K, a “sort of ‘home movie’ which is the third in a trilogy of ‘fakes’ that Alberto directed and produced.”  Salinas’s role on this movie left a lasting impression: “On film, I was Leni for only 19 minutes, but I still feel her like a part of me.”

Reflecting upon her early years in Spain, Salinas initially felt like a bystander in her life abroad.  “Despite years of Spanish language classes, my early memories of life in Spain are quiet and contained. I could speak well enough to communicate my needs, to order my coffee as I liked it, negotiate rent, and buy a bus pass, but I couldn’t keep up in conversations and I was only funny when I misspoke. Moving to a foreign environment and engaging solely in a nonnative language can be disorienting, but it comes to pass and you come to collect yourself.”  Over time, though, she became better integrated into the place where she lived. “Eventually you become part of a community…and you start to discover pieces of yourself that you never knew were there. Eventually you stop having to translate what at first felt like splinters of personality or to reconcile two rough-hewn halves”, she said.

As an undergraduate at UW, Salinas first started to think about translation while taking a capstone course called Contemporary Irish Dramatic Literature with Professor Míċeál Vaughan in the Department of English. “We read Brian Friel’s Translations for that course, a text that has since come to define me, to a point, and the way I view literary translation: ‘Uncertainty in meaning is incipient poetry’”, she remembers.

While assembling her application for the MA in Hispanic Studies, she met Katie King, a PhD student in Spanish & Portuguese who was running an on-campus translator’s advocacy group called the Multidisciplinary Translation Studies Graduate Research Cluster (GRC). Salinas shares that “well before I was accepted to the MA program, I began attending Katie’s events, enthralled by the heteroglossic depth and variety, the cacophony of ideas that filled those rooms. We spoke at length about the future of the initiative and, when the time came for her to defend, receive, and leave, she handed the reins that she had so adeptly wielded over to me.”

This year the GRC put on a number of events, including the two-part Fall Reading Series that included faculty and members of the UW community. “It was a spectacular and stimulating event composed of memoir, folklore, art history, Spanish guitar, and––of course––poetry”, she said. Translation studies will be undergoing a transition for the next academic year. “While we will not be forging ahead with the GRC in its current incarnation, I am looking forward to collaborating with the newly-established and faculty-led Translation Studies Hub in 2020-2021 in their efforts to promote translation literacy and practice on the UW campus and beyond.”

Brianna Salinas is halfway through her Masters program in Hispanic Studies at University of Washington, having begun her studies in 2019.  She is also a Teaching Assistant in Spanish & Portuguese Studies.  The film Leni K. may be watched on Vimeo.

By Casey Colvin, from Interview by Tony Geist