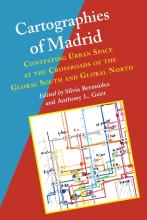 A group of scholars gathered February 6th in the UW Simpson Center for the Humanities conference room for a roundtable discussion of their recently published volume Cartographies of Madrid: Contesting Urban Space at the Crossroads of the Global South and Global North.  Panelists for the discussion were contributors Susan Larson of Texas Tech, Jill Robbins of UC Merced, Madrid scholar Ed Baker, and contributing editors Silvia Bermúdez of UC Santa Barbara, and Anthony Geist of University of Washington.

The origin of Cartographies began with a 2014 ACLA call for papers on the subject of “Capitals” and a two-day seminar on the semantic meaning of capitals, attended by six of the volume’s contributors.  Afterwards Geist and Bermúdez jointly worked at gathering scholars from the seminar and others to focus on the subjects of migration and the successive financial crises of the first decades of the twenty-first century, leading to their collaboration on this volume.

Silvia Bermúdez began the roundtable with some remarks on the volume. The book cover depicts an “imagined community” of connections and disconnections.  A recurring theme in the book is urban development in Madrid made without regard for people, in particular migrants from Latin America and Morocco.  This relationship between Madrid and its migrant residents is a product of “the post-colonial history of Madrid vis-á-vis the global south,” as Bermúdez put it. She finished her remarks with a review of the three parts of the book: “Capitalizing on Visual and Literary Culture, and Challenging Urban Exclusion,” “Sites of Memory,” and “Madrid as Lived Experience.”

Madrid Scholar Ed Baker gave an overview of Madrid’s history leading up to the Modern era in the context of its development from its designation as a capital in the Early Modern period, and its subsequent history of relatively unplanned urban expansion leading up to the end of the Franco regime.  Shifting to an exposition of the historiography of Madrid, he noted that the late and post-Franco era enabled a revival in Madrid studies, concluding “this book exists by virtue of these developments.”

Tony Geist addressed Madrileño and Spanish culture in the ten-year period following the death of Franco: “Franco’s death created a cultural vacuum but also invalidated the discourse of opposition.” For Madrid, this led to the rise of La Movida, a Spanish countercultural movement centered principally on Madrid as the city became the “youth capital of Europe.”  The Movida challenged prevailing conceptions of hegemony and gender identity, and notably featured music and conversational poetry as modes of artistic production.

Jill Robbins followed up with an examination of the period between the 1997 expansion of the Madrid Metro rail system and the 2004 Madrid Train Bombings.  The Alcalá line expanded the Metro into working class and immigrant areas, and the subsequent bombing attacked both the recently renovated Atocha station, a symbol of Spanish modernity, but also the working class and immigrants who utilized the rail system. Robbins also discussed both the official and grassroots memorials of the bombings, and the incorporation of elements of the latter into the former, as well as the dueling political visions of both the Right and the Left over how and where to memorialize the attack.

The final contributor present, Susan Larson, focused on Madrid in the aftermath of the 2008 recession, when the “neoliberal project of the 80s ran afoul” of its own emphasis on growth and development. Addressing the themes of nature and the city, narrative, and political discourse, Larson emphasized buildings such as prisons, airports, and apartments, “everyday spaces on the periphery,” not only decommissioned and left to nature, but also newly constructed and then abandoned.  She also discussed the anti-austerity movement of the period that arose in response to government cutbacks made as a consequence of unsustainable economic development.

The roundtable concluded with a lively discussion between the contributors and the other attendees, including a contrast of Madrid with other urban centers, such Barcelona with its comparatively planned urban layout.  While post-colonial Madrid may no longer be an imperial center, it is still an important global capital in the sense that it sits at the crossroads of the Global South and Global North, drawing comparisons to another city, the global capital (in a figurative sense) and global crossroads of Los Angeles.

Published in 2019, Cartographies of Madrid: Contesting Urban Space at the Crossroads of the Global South and Global North is Volume 43 in the Hispanic Issues series published by Vanderbilt University Press.