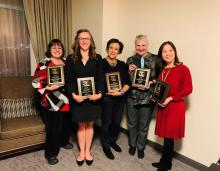 The Inspirational Leadership Certificate “is presented to a person or persons selected by the WAFLT board who has demonstrated leadership and inspiration to others in the world language fields. This certificate recognizes important contributions in promoting, organizing, supporting, defending, lobbying, or planning some important aspect of study of world languages and/or cultures” says the WAFLT website.

“María has been a true pioneer in the area of language pedagogy for heritage students. Having personally followed her work in the department over the years, it is deeply satisfying to see María’s decades of leadership in this critical area of language teaching celebrated at the state level by the WAFLT” said Donald Gilbert-Santamaría, Chair of the Department of Spanish & Portuguese Studies.

“I cannot think of a leader more deserving of this award than María Gillman. María is not only an outstanding teacher, admired and respected by students and colleagues alike, but also a truly inspirational educator. For decades she has been a guide, a mentor, and a model for Spanish heritage language teachers. Her work promoting and supporting the teaching of heritage languages, in both K-12 and higher education, has no parallel in the state of Washington” said Ana Fernández Dobao, Associate Professor and Language Program Director.

Gillman has been a been an active member and presenter in WAFLT since 2000.  She was previously awarded the WAFLT Public Awareness Certificate in both 2009 and 2013, the latter was received as a representative of the Center for Spanish Studies (CSS) along with then-director of CSS Eva González Abad.