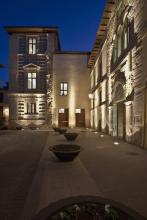 When the Department of Spanish & Portuguese Studies led the first group of SPAN 103 students to Leon in the spring of 2006, no one could have anticipated that the program would be the start of an important international collaboration not only for the department itself, but for the greater University of Washington community.  Just two years later, however, Anthony Geist, Professor of Spanish & Portuguese Studies, joined the then Dean of Arts & Sciences, Ana Mari Cauce, and the Honorary Consul of Spain in Seattle, Luis Fernando Esteban, on a trip to Spain to find a place for the UW to open a study center—its second in Europe.

Geist says that “We chose León because León wanted us. We also looked at the University of Salamanca, where I have contacts with a number of faculty and administrators, but we would have been one more of the many study abroad programs located there. Our partnership with the University of León and the City government has been an enormous privilege and has given us connections to institution and individuals in the areas of art and literature, business, government and sports.” Perhaps our greatest resource is our on-site coordinator, Santos Rodríguez.

The result of that trip was the UW Leon Center, housed in the 16th century Renaissance tower of the Palacio del Conde Luna.  Since its inauguration in May 2010 by the King and Queen of Spain the Leon Center has been home to programs from various disciplines, from Business, to Environmental Studies, and of course, Spanish.  “The Spanish Department has been one of the biggest supporters of the Leon Center, having run 19 programs there since it opened,” explains Lani Phillips, the Director of Program Development of the Leon Center. In addition to the two recurring language programs held at the Leon Center every year—an Advanced program in the fall and an Intermediate program in the spring—several faculty members in the Spanish Department have taken advantage of the resources available in Leon to run topic-specific programs, including a program on countercultures in Spain, children’s literature, and food culture.  In fact, Anthony Geist himself plans to run a study abroad program at the Leon Center in spring of 2020, which will focus on historical memory. Historical Memory and Cultural Expression" will be a dual-track program, taught both in Spanish and English. We hope to appeal not only to students of Spanish, but also those majoring in Anthropology, History, and International Studies, among others,” Geist explained. “We will study cultural artefacts (novels, poetry, film, photography) that documents the attempt to recover the memory of the Civil War and forty years of brutal repression that left 114,000 victims of the Franco regime still buried in unmarked graves.”

If you would like more information about the UW Leon Center, and what it offers, please see http://depts.washington.edu/leonctr/, or contact Lani Phillips (lanip@uw.edu) or Anthony Geist (tgeist@uw.edu).