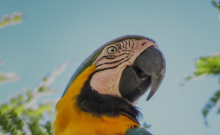 Students who pursue the Minor in Portuguese Language and Luso-Brazilian Studies study a language that is spoken by 279 million people worldwide, including Brazil, the world’s fourth-largest democracy and eighth-largest economy.  Scholarship opportunities exist for students of Portuguese through the Foreign Language and Area Studies (FLAS) Program, the Boren Scholarship, and Critical Language Scholarship (CLS).

Students interested in declaring a Minor in Portuguese Language and Luso-Brazilian Studies should contact Lecturer Eduardo Viana da Silva at evsilva@uw.edu or speak with their Major advisor.  More information about the Minor may be found on its page on the SPS website.