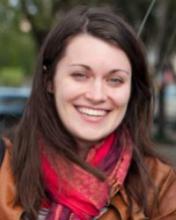 “Even before I started my studies, the Department of Spanish & Portuguese Studies has been a welcoming and intellectually stimulating environment,” said Erin McCoy, who completed her MA in Hispanic Studies in Spring of 2017.  “The professors have always been available to answer questions and guide me in my studies. I’ve also been offered ample opportunities to travel and continue my studies outside the classroom, for which I will always be grateful.”

McCoy had already moved to Seattle prior to applying to the Master’s Program at Spanish & Portuguese Studies: “after working for two years as a photojournalist, I wanted a change and moved to Seattle in 2012. I worked for a few years as a freelancer and content editor, but I always knew I wanted to go back to school. I missed speaking Spanish, and also missed the literature and culture classes that I’d so enjoyed during my undergraduate years.”

Moving to Seattle aided McCoy’s interest in literature and poetry independently of her studies:  “besides being a gorgeous city flanked by the Puget Sound and two mountain ranges, Seattle embraces literature and the arts more than anywhere else I’ve ever lived. There is a thriving, active literary scene here, to the point that you might have to make the difficult decision between three different poetry readings that are taking place on the same night. Living here has been a wonderful experience for me — personally, professionally, and creatively.”

McCoy wrote her Master’s thesis was a close reading of Una sombra donde sueña Camila O’Gorman, The only novel of Argentine poet Enrique Molina: “As a poet interested in writing prose, I felt I could learn a great deal from this highly lyric novel.”  She compared Molina’s rendering of a real nineteenth-century event with a very different depiction in Camila, a film by Argentine director María Luisa Bemberg.  “The class in literary theory that I took in my second quarter at UW provided essential critical frameworks for the development of my arguments, and the literature classes in Latin American and Spanish contemporary literature helped me develop the analytical and dialectical skills necessary to write the thesis,” noted McCoy.

Having completed her degree, McCoy reflected on her time in the program: “After some fantastic seminars, I’ve also graduated with a much greater appreciation for and fascination with medieval and early modern literature, and I hope to further my studies in these areas.”  She plans to spend the next year writing: “I’m going to spend the year after graduation working on a few different poetry manuscripts, but afterwards I hope to pursue a Ph.D. in Hispanic Studies and Literature, either studying early modern Latin American literature or modern/contemporary Hispanic literature.”  McCoy also hinted on a new area of literary interest:  “I’m particularly interested in animal studies — that is, investigating how the non-human animal is depicted in literature and what that can tell us about a culture’s hierarchical structures, moral/ethical principles, and interactions with its environment.”