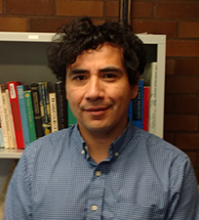 Dr. José Francisco Robles, Assistant Professor of Spanish, is the newest addition to the faculty of the Department of Spanish and Portuguese Studies at the University of Washington.  Robles, who began teaching for the department Autumn Quarter 2016, is originally from Santiago, Chile, and comes to the department as a specialist in Latin-American Colonial Literature.

“I specialize in colonial Latin American culture with an emphasis on the relationship between literature, philosophy, and science during the 18th century.” Robles goes on: “I am also very interested in examining intellectual life in colonial America, and how literary texts convey changes and developments in the concept of knowledge.”

For his first class, in Autumn Quarter, Robles taught SPAN 473 “which was devoted to studying 19th century Latin American novels, short stories, and essays…. students examined a wide array of topics through different works, including criticism of slavery and ethnic divisions, emerging identities, sex-role stereotypes, and education.”  Robles was pleased with the outcome and with the students that he had: “I am very lucky, as I had a great experience teaching this course for the first time. Students were absolutely fantastic and engaged in this course, the works and topics of which were new for them.”

Since starting in the department, Robles has refreshed the curriculum with regards to the classes the department offers in his area of expertise.  For example, his Winter Quarter special topics class, SPAN 395, focuses on the poetry, chronicles, novels, short stories and films produced during and after Pinochet’s dictatorship in Chile.

Robles is currently working on his first book manuscript: “[The book] is devoted to exploring why and how 18th-century Mexican writers construct an image of a republic of letters in their country, drawing upon their study of the pre-Columbian past and publication of modern scientific periodicals.”  Robles is also planning a second book on “…several eighteenth-century Latin- American scholar-travelers in Europe who embark on the ‘Grand Tour’ [of Europe].”

Robles, who spent several years on the East Coast, has an appreciation for our region: “[Seattle] is a full-of-life city, and for me it plays a very important critical role ––not always recognized–– in keeping alive discussions regarding politics, culture, and environmental issues in this country.” Although he has onlybeen here a few months, he has quickly come to feel at home in Seattle: “With its many mountains, the intensity of the Pacific Ocean, the flavors of seafood and coffee, and, of course, bookstores and libraries almost everywhere, I can confirm that Seattle is the city that perfectly interprets my own sense of living.”

Prior to joining the department, Robles was Visiting Assistant Professor of Spanish at Colgate University in Hamilton, New York.  He earned his Ph.D. in Hispanic Literature at El Colegio de México in 2012, and holds two M.A. degrees; one in Hispanic Literature from El Colegio de México (2011), and the other one in Latin American Cultural Studies from Universidad de Chile (2009).