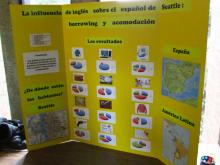 On March 10th the students of Spanish 404: Dialects of World Spanish presented their final projects in the 2nd floor B-wing of Padelford Hall. The presentations, the result of sociolinguistic fieldwork carried out by students, covered subjects such as word choice by Heritage speakers, comparisons between dialects of Spanish, and word choice by Spanish-speakers residing in Seattle.

“What it shows is that although Spanish is one language there are many renditions of that language” said Víctor Fernández-Mallat, lecturer and instructor of Spanish 404. “Language is an abstract concept. It’s abstract to say a language is ‘English’ or ‘Spanish’ or ‘Italian.’”

In order to conduct proper sociolinguistic fieldwork, students worked on methodology in class, in particular with designing interview questions and questionnaires as well as learning how to conduct interviews. These projects often involved going into the community and talking with students, business owners, and other local Spanish speakers.

Although students were instructed in methodology and theoretical concepts, they were also free to implement them as they saw fit for their final project: “they had total freedom in approach and methodology and how to use them” said Fernández-Mallat. Students had to present, not just write a paper.

Spanish 404: Dialects of World Spanish is offered, generally on an annual basis, by the Department of Spanish and Portuguese Studies.  A 5 credit course, credit for Spanish 404 is applicable towards the Spanish Major.  It is also offered as SPLING 404.