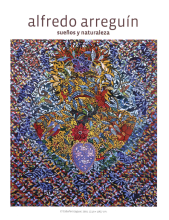 As a resident of the Pacific Northwest for over 5 decades, Mexican-born Arreguín combines elements of his homeland with traditional artistic styles of Washington state, as well as influences from his military service in Korea (1959-1960) and visits to nearby Japan.

During his youth in Michoacán, México, Arreguín spent much of his free time exploring the surrounding forests, rivers and mountains. It was during this time that he developed his intense bond with the natural world. After moving to Seattle, this passion has grew as he came to understand the deep historical and artistic connection that the northwest has with the environment.

His distinctive intricate style has earned him recognition as a leader in the pattern painting movement.  This sensibility of his stems from the geometric patterns prevalent in Mexican popular culture – tile patterns, pottery, textiles and indigenous folk art. Arreguín has said this style allows him the ability to “play with the hidden” so that viewers of his work can continue to discover new elements in his work even after the third or fourth time seeing it.

The Division of Spanish & Portuguese Studies is proud to sponsor this phenomenal event. A complete exhibition of Arreguín’s Sueños y naturaleza is currently showing at UW’s León Center in Spain. The show will be on display through July and August 2014. In its first week, the exhibit received over 1,100 visitors.

Since its creation in 2008, the UW León Center has been home to study abroad programs, conferences, academic research projects and countless cultural events and exhibits. It is housed in the 16th century tower of the Palacio del Conde Luna in the historic medieval center of the city. For more information, visit depts.washington.edu/leonctr.