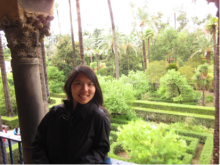 “Joy is an exceptional individual who demonstrates not only a mastery of the grammatical material but also a strong interest in political, cultural, and social issues of Spanish speaking countries,” said Senior Lecturer, Inma Raneda-Cuartero. “I have never worked with a student who gave herself so completely to her projects and was so willing to stretch her own limits and level of comfort in order to become a more critical thinker.”

We heard from Joy who is currently in Taipei, Taiwan.

How were you selected to receive this honor?

Maa: “To be honest, I’m feeling a little confused and overwhelmed right now. I wasn’t aware of the fact that I was nominated until I received a notice that I had been awarded the Dean’s Medal, and so I’m still trying to digest it all.”

What does it mean to you to be a Dean’s Medalist?

Maa: “Receiving this honor feels like an affirmation for me. It wasn’t the easiest choice deciding to major in not one, but two languages, for a number of reasons, the most obvious one being that you don’t often hear about someone double majoring in languages, much less two languages that are so different from each other. I carried a lot of uncertainties with me when I first joined the Spanish Department, and the only thing I had going forward was the fact that I really did enjoy learning languages. Being selected as Dean’s Medalist to me means that it’s okay to walk off the beaten path. It’s okay to have a double major that raises eyebrows. It’s okay to make my education mine and to not limit myself to what others before or around me have done.

“More importantly, this honor is a clear testament to the many people who have supported me and been a part of my journey through college. Since being named Dean’s Medalist, I have received so many emails from Spanish teachers and TA’s I would never have imagined still remember me. I always hold myself to the highest standard and do my best in everything. But in a university as large as the University of Washington, I honestly believed that I would pass through unnoticed; it’s easy to feel lost in a crowd this big. Receiving this award has proved to me that people do see what you do; they recognize and they remember. For some reason, this realization escaped me throughout my entire college career, until now. That, more than anything else, has made everything I’ve done during my time at UW so much more meaningful. I didn’t go through undergrad on my own. I would never have had a chance at getting where I am today if it weren’t for my teachers, TA’s, and classmates. It’s humbling but at the same time, uplifting and encouraging. It hasn’t been a solitary journey after all. That’s what the Dean’s Medal means to me.”

How did the Spanish & Portuguese Division support you and contribute to your success?

Maa: “Honorable mention goes, of course, to the professors and TA’s of the Spanish Department. I deeply respect all of my Spanish teachers. Every single one of them had a genuine passion for what they did, their subject and the language, and they were all dedicated to sharing that passion, experience, insight and knowledge with their students. They encouraged us to not only learn, but to express ourselves in Spanish, to make the language ours. One of the scariest things about learning another language is the fear of making mistakes, which stems from the fear of being judged by others. And this fear can hold someone back from doing what he or she loves, from reaching his or her full potential. But teachers can lead you past that fear and show you what’s beyond. I learned so much from all of my teachers—and I’m not referring to just the knowledge aspect, but also the incredible support and encouragement that helped me mature as a student of Spanish. For me, the teachers that make all the difference are the ones who respond to every single question you have, and then ask you for more; the ones who will remember you, long after you’ve graduated; and the ones who lead you to love a language more than you did before.

“And so to all my teachers and TA’s: Muchísimas gracias por todo y más.”