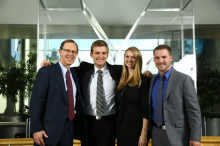 Baker, a Business and Spanish major, will graduate in June. Her passion is technology and her business degree focused on Information Systems. “Spanish rounded out my skill set,” she said, “and opened up a new world for me.” Baker said that her Study Abroad experience in Cádiz shaped her as a person and changed the way she thinks, acts and learns. This fall, Baker will begin working for the Denver branch of Deloitte Consulting, an international tech consulting company. “Fluency in Spanish strengthened my application because Deloitte recently acquired a Mexican company.”

Twaddle, who graduated in March, majored in Business Management and International Business. Born and raised in Spain, Twaddle lived in Madrid for the first twelve years of his life and grew up speaking both languages. In lieu of studying abroad, Twaddle worked in León, Spain for a tech consulting company, called Xeridia. He helped them expand operations into the U.S. and Colombian markets. In late April, Twaddle moved to Belo Horizonte, Brazil, to work for iZap, another tech company where he is working on international expansion and business restructuring. “By learning Portuguese, I will be able to fulfill my dream of becoming trilingual. I believe there is no better way to become fluent than by immersing myself fully in the Brazilian culture.”

Upton, graduating in June, is an Accounting major with a Spanish minor. Discovering that he loved and had an aptitude for Spanish in high school, Upton traveled to Madrid and was inspired to attain fluency in Spanish. “Language is a gateway to understanding a culture and Spanish has given me greater cultural sensitivity,” said Upton who also studied in Cádiz. “It was another life,” he said, “and a valuable experience to live in the EU at this point in history, seeing first-hand how Spain’s current economy is affecting people.” Upton is interviewing with a number of public accounting firms, and hopes to work in Latin America or Spain on an international rotation.

When an eblast about the BYU Case Competition caught Upton’s interest, he talked to faculty at the Foster Business School and decided to get a team together.

Twelve teams consisting of three participants were given the same prompt: “Should Walmart go into the organic food industry or not?” The argument for or against had to be presented in Spanish. Ultimately, the teams competed for the best solution. “But if you can’t communicate your ideas you will fail.” said Baker. “So the language component was the most important.” Each team presented three times in the preliminaries for four to six judges. When the top three teams were announced they immediately presented for the fourth and final round.

SPS: So, how did it happen? How did you three end up forming a team and going for it?

BU: “I recruited Amanda and Josh because I knew them as colleagues and friends and knew they would be perfect.”

AB: “I was wary of the time commitment, but Brandon made me feel guilty if I said no!”

JT: “I was hesitant, too, because I had a lot of work to do before graduation. But I did it because of Brandon and Amanda.”

SPS: What did each of you contribute to the team?

AB: “I had experience in Case Competitions and I knew what judges look for and how to make our ideas flow.”

BU: “The bedrock of our presentation had to be language – solid Spanish. And then we built on top of that our analysis and argument.”

AB: “Brandon speaks better Spanish than I do.”

BU & AB: “But Josh is the best! His Spanish was the strongest of all.”

JT: “Brandon’s financial analysis was really sharp and critical to our presentation.”

BU: “Amanda brought a good background of connecting spoken ideas with visual. And she challenged us. She played devil’s advocate all the way through.”

JT: “It was a perfect combination of analysis, organization and passion.”

SPS: How was it to work together as friends?

BU: “We were able to be brutally honest with each other.”

AB: “We had the most fun at the competition of all of the teams!”

JT: “It’s true! We high-fived each other after every presentation, ate meals together and laughed a lot while the other teams seemed really nervous and stressed, always checking notecards.”

AB: “Case Competitions are incredibly hard, especially on the nights when we were prepping until 4 am. When Josh and I were fading, Brandon kept us going.”

The team agrees that third place was disappointing. “Our third place win was mitigated by the fact that we really wanted first,” said Baker. “Our solution was progressive and so ‘Seattle,’” she added. “At UW we are taught to think outside the box, especially in the Business School. In the Spanish Department, we are not following formulas but are exploring ideas that are limitless. And that’s what we brought to our presentation.”

The team rehearsed their presentation with Marilís Mediavilla, Teaching Associate and Inma Raneda, Senior Lecturer. All three students were bolstered by the critiques and reaffirmation of their teachers.

“When I first heard their presentation in Spanish,” said Raneda, “I was impressed by their language command, level of organization, creativity and the content of their work, and most of all by their energy, commitment and enthusiasm.” Raneda added that all three students are exemplary in every sense. “They always brought to my classes leadership abilities, persistent initiative, enthusiasm, and an incredible work ethic. It has been a joy to have them as students in my classroom.”

Mediavilla, who has also taught all three students, agreed. "I was greatly impressed by the work the team had put together not only linguistically but also conceptually speaking.  They had it all: determination, commitment, and success! They are role model students and, as a teacher, their enthusiasm and learning experience was the best reward for me. Way to go to the three of you!”

Despite his initial hesitation, Twaddle said the case competition experience was one of the top three highlights of his college experience. “I was representing the school I love, speaking the language I love and working with two colleagues I admire and for whom my admiration increased even more as a result of our work together.”

In closing, Baker, Twaddle and Upton reflected back on their time with the UW and, in particular the Spanish Division.

Twaddle said, “This was my dream college and I am proud to put it on my resume. My experiences, both domestically and internationally have been invaluable and have helped prepare me for a career in International Business.”

“The Spanish department added dimension to my education,” said Upton. It fed my passion to think differently and added a depth of increased social awareness to my business school degree. Baker agreed. “The Spanish Department made me a well-rounded individual. Being part of the Spanish Department provided balance for the numbers and rules in business classes.”