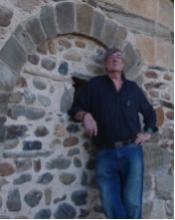 (I love autumn and I love its sorrow,
its grey skies, its trees blurred
by the fog, vaguely beautiful…)

The beginning of another school year: bright young faces on campus, eager to learn and to live.

2013-14 is off to a good start for Spanish and Portuguese Studies. In September we greeted the first cohort of students in our innovative new PhD program, which will combine rigorous training in literary history and criticism with a focus on public scholarship, preparing our graduates both for careers in college and university teaching as well as in other, less traditional professions, such as cultural organizations, non-profits, museums, and private industry. We are also recruiting now for next year’s doctoral students, casting our net wide throughout the US, Spain and Latin America, hoping to attract the best and brightest.

This fall we welcomed two new members to the department. Ana Luengo, visiting assistant professor, comes to us from the University of Bremen (Germany), becoming the fourth Ana on the faculty! She is an authority on post-dictatorial literature and the recovery of historical memory in Spain and Latin America, and is currently teaching two sections of Spanish 322, an introduction to literary studies.

In mid-September Sam Jaffee defended his dissertation at the University of California, Irvine, packed his bags and two days later moved to Seattle to begin teaching as a lecturer in the department. He is teaching two sections of second year Spanish, communicating his enthusiasm and knowledge to his students.

As we greet Ana and Sam we prepare to say farewell to Joan Fox, featured in this issue, who will be retiring at the end of the fall quarter, after over 20 years in the department. We will miss Joan and wish her health and happiness for many years to come.

In his annual address on October 17, President Michael Young spotlighted the León Center (also featured in this newsletter) as a model for the globalization of education at the UW, saying “the León Center aspires to much more than simply having our students show up, stay for a while and then depart. Rather it actively seeks to engage with the local community, to be an important resource for the city and region.” And on November 4 Lani Phillips and I held an informational session to encourage faculty from across campus to take advantage of this extraordinary facility.

Finally, the Seattle Art Museum has two outstanding exhibits for all aficionados of Hispanic culture. “Peru: Kingdoms of the Sun and Moon,” considered the greatest collection of ancient and modern art to come from that country, opened last month and runs until January 5. Two of our instructors, Sam Jaffee and Marilís Mediavilla, have already taken their classes to the exhibit.

From February 13 to May 25 of next year the SAM will feature “Miró: The Experience of Seeing,” in partnership with the Reina Sofía Museum in Madrid. The department will be doing a good deal of public programming around this exhibit of the late works of the great Catalan artist.