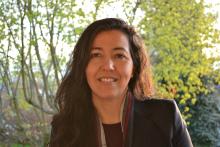 Congratulations to Professor Ana Gómez-Bravo whose forthcoming book with the University of Toronto Press is titled: Textual Agency: Writing Culture and Social Networks in Fifteenth-Century Spain.

In her book, Gómez-Bravo, who specializes in 15th century poetry, focuses on the life of a poem and takes a close look at 15th century writing, culture and social networking. “Understanding the cultural context of the time a poem was written not only enhances the meaning and enjoyment of the poem for the present day reader,” explained Gómez-Bravo, “but also shows how the people of the time functioned.” The objects of everyday life such as food and writing materials are essential to learning about a time period. “Material things, culture and language are interrelated,” said Gómez-Bravo. 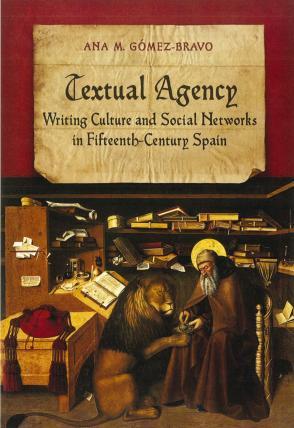 Gómez-Bravo’s book illustrates the intersecting relevance of different aspects of material culture in the formation of a book of poetry and the creation of a strong authorial self through the process of compilation. Authorial and textual agencies were competing forces in the midst of the institution of the Inquisition, the advent of the absolutist state, the growth of cities and the constitution of the Spanish nation. A study of the contributions of Jewish converso poets displays the ways in which all these different forces provided a conflicting, albeit fertile, ground for literary activity.

Gómez-Bravo first became interested in the topic when she was trying to visualize the material aspects involved in handling and copying fifteenth century poems. “I saw that the model of the monastic scriptorium that was tacitly applied to the production of these poems did not work and could not explain many of the phenomena that I was seeing,” she explained. “In addition, there were plenty of references within the text of the poems that talked about sending poems, copying them on a piece of paper, tossing them about in public squares, posting them on doors, sending them to friends, etc.,” she added. “So I tried to figure out how a single poem makes it into a grand book.”

One of the interesting facts that Gómez-Bravo discovered was that many of the strategies used to write, copy and preserve a single text were the same used in the production of administrative records by State and Church (including the Inquisition). The point of union came by way of the poets themselves who were not professional troubadours, but rather administrators or people employed in one way or another in church, noble or royal administration.

The first two chapters of Gómez-Bravo’s book are dedicated to figuring out who these poets were and what their administrative work involved from a material standpoint. “Many of them were of noble descent,” she said, “but scores of others were of obscure origin, meaning that they had risen from the lower ranks, the middle urban classes and the upper strata of the peasantry.”

Gómez-Bravo’s book will be available on December 23, 2013 but can be pre-ordered through this link. Watch our department webpage, http://spanport.washington.edu/news, and Facebook page for the announcement.