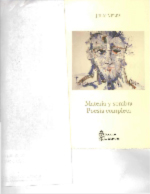 December 2012 marked the twentieth anniversary of the death of Spanish poet Julio Vélez. The occasion was commemorated with the launching of Materia y sombra:  Poesía completa, published by the Diputación Provincial de Salamanca, with a lengthy introduction that I wrote for this edition. His son, also named Julio and a professor at the Universidad de Madrid, contributed a number of previously unknown poems and two plays that he rescued from the files of the Franco-era censorship board. María de los Ángeles Pérez López, Julio’s prize student and herself a poet and professor of literature at the Universidad de Salamanca, coordinated the edition, and José Ramón Ripoll, an acclaimed poet and friend of Julio’s wrote a moving prologue.

Julio and I met over a meal in 1980 (I still remember what we ate) and it was love at first sight. He quickly became my closest friend and remained so for the rest of his life. This book is testimony to our friendship.

Julio Vélez was born in 1946 in Morón de la Frontera, in the province of Sevilla. He began writing in his teens and published three books of poetry in his short life, a fourth being published shortly after his untimely death. He left behind two unpublished manuscripts as well. Julio was involved in radical politics in the waning years of the Franco dictatorship, serving three jail sentences for his opposition to the regime. With Spain’s transition to democracy he resumed his studies, eventually completing his doctorate and securing a teaching position at the University of Salamanca, Spain’s oldest. In winter quarter 1990 Julio was visiting professor in our department, and in his short stay made a powerful impact on students and colleagues alike.

There are different ways of writing poetry. Some poets transform life experience into aesthetic expression, creating texts on paper or in the air. Others live poetry in their daily lives, turning day-to-day events into poetic experiences. Julio Vélez was a poet in both senses. Journalist and filmmaker Miguel Ángel Nieto always maintained that Julio was a “poet for the twenty-first century,” and with this edition and an anthology published last year, his work is finally getting the attention it deserves. In the last several months homages to him have been held in Sevilla, Morón de la Frontera, Cádiz, Madrid and Salamanca, with more to come. In April we will launch this edition with a ceremony in the UW Study Center, in León.

Veinte años no es nada, the Argentinian tango says, Twenty years is nothing, and reading Julio’s poetry today I feel his presence as powerfully as when we would meet students for coffee in the smoking room of the HUB.

The Spanish folksinger, Lucía Sócam, has set one of Julio’s last poems to music, “Volveré a Morón,” in this moving version: