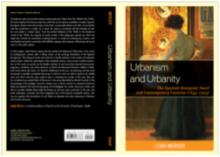 Hot off the press:  Congratulations to Leigh Mercer, Associate Professor of Spanish and Graduate Program Coordinator, whose book, Urbanism and Urbanity: The Spanish Bourgeois Novel and Contemporary Customs (1845-1925), published by Bucknell University Press, hits the shelves on November 14, 2012.

Urbanism and Urbanity is a groundbreaking cultural history of the nineteenth- and early twentieth-century bourgeois public sphere in Spain. It analyzes the literary representation and construction of gender-based social rituals inscribed onto the map of modern Spanish cities. Addressing novels from Realism to Modernism as documents of customs in dialogue with urban treatises, conduct manuals, and city guides, the book presents a comprehensive picture of the discursive generation of the Spanish urban middle class.

Mercer studied more than twenty novels produced in Spain between 1840 and 1920. “My book is an exploration of the literary means by which the social options available to modern Spanish bourgeois citizens were discursively constructed, occasionally before and often concomitantly to their production in reality,” explained Mercer. “As a result, this study is concerned with the interplay of realism and reality in modern Spain,” she added.

From the book jacket:  “The linking of novels and urbanism is hardly arbitrary in the context of nineteenth century Spain. For Spanish intellectuals of this era, city planning and the novel functioned as parallel, enmeshed discourses in which to work out what it meant to be middle class and the roles this class ought to play in contemporary society.”

“In these pages,” said Mercer, “I argue that the spatial and behavioral discourses in the novels of contemporary customs offer a telling history of the evolving formulation of the Spanish bourgeoisie.”

Urbanism and Urbanity, primarily targeted at Hispanic Studies professors and graduate students as well as those interested in nineteenth-century Spanish culture and the development of the modern Spanish novel will have a number of audiences.

“I'm so pleased with how the whole project turned out!” said Mercer.