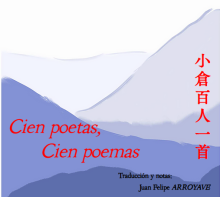 Juan Felipe Arroyave, a 2019 MA and PhD graduate of the Spanish and Portuguese Department at the University of Washington (UW), has published his translation Cien poetas, cien poemas in e-book format. The original anthology of classical Japanese poetry Hyakunin Issuhu crossed Juan Felipe´s scholarly path while he was studying at the Spanish and Portuguese Department at UW where he took Japanese and Japanese literature classes simultaneously. A successful intersection of spaces for which he feels grateful.

As a native Spanish speaker from Colombia, and an eager reader from an early age, Juan Felipe´s passion for literature has been a constant in his life since he was a kid. So much so that he related deeply with the author of a classical Japanese work called Sarashima Nikki, since they were both obsessed with the tales and books that came across them and mesmerized by the possibility of reading them all. ¨I understand that feeling really well¨, Juan Felipe said. In fact, considering the odds of studying literary works that he knew and loved as well as becoming acquainted with other works he could potentially enjoy is ¨what drove me to pursue MA and PhD degrees at the University of Washington¨, he added.

Although it was after he graduated from High School when he ¨discovered¨ poetry through an anthology of Sappho's verses, it was his experience as an M.A student and ¨specifically the influence of Professor Edgar O´Hara at the Spanish and Portuguese department¨ that exposed Juan Felipe to ¨the most beautiful stuff I ever read¨, he remembers. In his favorite registry, he enlists the work by Peruvian poets Luis Hernández and Blanca Varela; Antonio Machado's Soledades, galerías y otros poemas and Rafael Alberti's Marinero en tierra; medieval Galician-Portuguese Cantigas de amigo and Andalusian Jarchas.  He also read a lot of poetry in English and Japanese during his time at UW, and he could mention William Carlos Williams, Christina Rossetti, Yosano Akiko and Kobayashi Issa among the authors that left the deepest impression in him.

From his fairly accidental first contact with Japanese literature in a bookstore in Medellin (a mask in the cover of Royall Tyler's Japanese Nō Dramas is to blame), to the digital publication of his translation of Hyakunin Issuhu, Juan Felipe´s dedication, perseverance, and enthusiasm for every task he pursues have played a distinct and well-shaped role in all his endeavors. For him, ¨going to graduate school in the US made me realize how lucky I was'' and he emphasizes the importance of reading English and being familiar with technology, which “has made a gigantic cache of literary works available for the first time for many of us”, he acknowledges. Despite that, he feels that these same tools and skills “end up determining what we read and how we read it”. As a countermeasure, he thinks that “direct translation is the best way to engage meaningfully with other literatures, and it grants your readers the opportunity to do the same”.

Following this approach and taking it into practice, while at the University of Washington, he ¨took a swing at translating the first 20 poems in the Hyakunin Isshu¨, he recalls. However, it wasn´t until 2019, when the Inter-University Center for Japanese Studies in Yokohama offered him a scholarship, that he ¨received the perfect amount of guidance, instruction and encouragement for tackling this project head-on¨, he admits. Fortunately, ¨what is perhaps the most prestigious Japanese language program in the world gave me an opportunity to improve my knowledge of modern Japanese and, at the same time, to get acquainted with bungo, or classical Japanese¨, he adds. The opportunities presented to Juan Felipe in Japan have strengthened his connection to both cultures and languages. This experience helped realize a lifelong passion for him and makes these works accessible to many.

Currently, Juan Felipe Arroyave is teaching a class at his alma mater in Colombia and reading and translating bits of Japanese literature in his spare time. Cien poetas, cien poemas is his first published translation, but he wants to tackle other works within the Japanese classical canon, particularly Bashō's Oku no Hosomichi and a small selection of Zeami's Nō plays. Stay tuned to appreciate more of his extraordinary work to come.

A web version and downloadable PDF of Cien poetas, cien poemas can be found in this link.