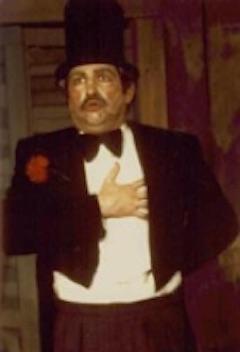 Farris Anderson was a professor in the Spanish and Portuguese Department from 1966 until his retirement in 1999. He served as chair from 1995-1999. He gained emeritus Professor status in 2000 and worked as a part-time retiree until 2005, both teaching classes and acting as a consultant for the Cádiz program. He passed away October 7, 2020. Our sincerest condolences go out to his family. You can find his obituary here.  The following are memories shared by friends and colleagues.

Farris Anderson was the director of my dissertation on five novels of Benito Pérez Galdós, and I owe to him much gratitude for his unwavering support and encouragement, and also for the many many hours we spent discussing Galdos's characters, his plot twists, Madrid, and much more. As one does when discussing any novel, we argued over how we might have rewritten the endings, in the end giving this choice back to the author, although sometimes, as in the case of Tristana, reluctantly. I should add that we didn't always agree.

What I most remember about Farris was a social side that focused on food, talk and fun. Farris loved to cook for people, and he was a talented and creative cook. Dinner would begin in the kitchen around a plate of beautifully arranged aperitifs. With a drink in one hand and the other reaching out to the platter, we would talk and watch Farris complete the final preparations of an equally delicious entree. There would be a light dessert, served in a slightly perfunctory manner while we waited for the real dessert, which was listening to Farris play on his grand piano.   His repertoire consisted of the night club songs, blues, show tunes that he played without music from his own arrangements. One evening, we listened to each other play a Mozart sonata and we agreed that since he could play like Hoagie Carmichael, he could probably forget about Mozart. Although Farris had no interest in returning to the South to visit, I think he knew every song with Georgia in its title and he played them all. We sang and he helped us when we stumbled on the lyrics. But he was rather shy about singing, he preferred to play and we preferred to listen. Eating his cooking and listening to him play, that is what I remember about Farris. It is sad to think that we will never hear him play "Georgia on My Mind” again, or so many others. Farris was a man of many talents, and a loyal friend.  He will be greatly missed.

I met Farris in the early 1960s when we were graduate students in the Department of Spanish and Portuguese at the University of Wisconsin in Madison. We reconnected In the early 70s. We were living in Madrid, a city Farris visited periodically over a period of many years to do research and to lead a study abroad program sponsored by a coalition of universities. We saw him on such visits, and on one occasion we even accompanied him and his students on a Spring-break bus tour to parts of Castilla-Leon and Extremadura. One frigid night in Salamanca we watched with them a Holy Week procession passing through the Plaza Mayor. I remember the lights, the drum beats, the pasos depicting the Easter story, the cone-shaped hats on the penitents, the crowd milling about. It wasn’t my first procession, but seeing it in the company of those American students fixed it in my memory.

We go back half a century, which isn´t all that much if you´re a geologist. I´m not a geologist, and Farris wasn´t either. We were, each in his own way, archeologists of Madrid, its history, culture, vivencias. He was more focused, less scattered; no surprise, most scholars are. He was hopelessly besotted with the Madrid that began with Mesonero, and here we were in complete agreement as opposed to the consensus that don Ramón—always and inevitably contrasted with Larra, as though in a boxing match--was a frivolous non-starter who trivialized everything he touched. We talked about it at some length, usually over a bottle of wine, and came to the conclusion that the first and greatest trivializer of Mesonero was Mesonero. Anyone who has read his Memorias de un setentón without blinders knows that we were right on the money. If Farris´s Madrid began with Mesonero, it flowered with Galdós. I know for a certainty that having given up early in life on the American South, he would have loved to have lived somewhere in the environs of the Plaza Mayor in the Restauration. It is possible that he wasn’t fully and intimately acquainted with every stone of every Madrid street and every building that makes an appearance in the Novelas Contemporáneas, but forty years ago he had reached ninety-five percent and was heading resolutely to the finish line. He never quite made it, and we never got to do the book that we talked about and talked about and talked about. But I'm confident that someday we´ll meet up in Carpetania heaven and we´ll get after it.

Farris and I were colleagues in the Spanish and Portuguese Department for many years; I was already teaching at UW when he arrived as an Assistant Professor.  His scholarship in the area of Spanish drama added significantly to the course offerings of the department. But even more importantly, his love of theater created an enduring community of colleagues and students who participated in his wonderful productions over many years. I was fortunate to have acted in several of the plays, and to have attended a number of others. I can say from my own experiences that Farris’ dedication, expertise and effort contributed enormously to the Humanities education of all of us who were involved—whether as audience or as participants.  I’m sure there are many who, like me, have fond memories of those wonderful experiences, and of sharing time with Farris. He was a thoughtful, caring individual, and I am thankful to have known him.

Ed Baker and Bridget Aldaraca introduced me to Farris Anderson at the MLA convention in Chicago in 1977. We would not meet again until ten years later, when I joined the Department of Romance Languages at the UW in September 1987. My memories of Farris include parties at his beautiful house on Interlaken Blvd, a stone’s throw from the Arboretum, where he played the piano and Ed sang; his love for Madrid and an original poster from the Movida Madrileña hanging on the wall; his stint as Chair of the Division of Spanish and Portuguese in the late 90s, after intense infighting led to the separation from French and Italian, and,  the last time I visited him and Elizabeth in their new home on Bainbridge Island several years ago.

But perhaps my most enduring memory of Farris has to do with the founding of the NW Cádiz program. A fervent believer in the value of study abroad, Farris originally conceived of the program as a junior year experience. Initially it was to be a partnership between the UW, Oregon State, and the University of Alaska. Each institution would provide a resident director for a year on a rotational basis. OSU and UAK pulled out at the last minute when their administrations were not willing to pay the salary of a faculty member for the year of their directorship in Cádiz. That threw it back to us. Suzy Petersen directed the first program in 1997-98, and I stepped in for 1998-99, and returned two years later. I forged deep intellectual, literary and personal relationships in Cádiz that have continued until today. I am deeply grateful to Farris for his vision that created this wonderful opportunity for UW students and faculty.  Adiós, Farris. Caminos de leche y miel.

I met Farris over fifty years ago when he was finishing his Ph.D. and I was just beginning graduate studies in the Department of Spanish and Portuguese at the University of Wisconsin, Madison.

That year (1968) we both performed in a Miguel Mihura play under the direction of an inspiring teacher, Roberto Sánchez, who also directed Farris’ thesis project on Alfonso Sastre, a prolific Spanish playwright and author whose dramatic works figure prominently in Farris’ subsequent publications.

As colleagues at UW, my first really close collaboration with Farris occurred in 1974 when he directed our departmental student & faculty production of the same Mihura play, “Tres sombreros de copa,” in which he cast both of us in the very same roles we had played as graduate students at Wisconsin (Don Rosario and Paula). Nearly a quarter of a century later, from 1997and until he retired, Farris and I spent countless enjoyable and ultimately rewarding hours working on the departmental study abroad program he established in Cádiz. Each of these collaborations opened my eyes two incredibly meaningful experiences we, as educators, can offer our students. For this I am forever in Farris’ debt. I will miss him.

We who were colleagues of Farris for several decades remember him for his record of rigorous teaching, estimable scholarship, and productive mentoring of scores of graduate students.   Most of all everyone treasures memories of the annual productions of modern Spanish plays mostly, that Farris created and directed, always with the cooperative involvement of undergraduate and graduate students, and also members of our faculty, to the general acclaim of all the community.

Many will recall with no less pleasure the lively parties Farris hosted in his singularly attractive Pink Mansion, from which a bouillabaisse of savory odors, lively conversation, and Caribbean rhythms and classic jazz issued to pique the curiosity of neighbors.

More personally I recall with lingering satisfaction the delicious Mexican dinners that Cecilia Altuna, our colleague in Portuguese, cooked for small gatherings, always including Farris and our French colleague Bob Ellrich: unforgettable enchiladas, beans, tortillas, tomato salad, Mexican beer, ice cream, and then bourbon or more beer, and coffee.  Good friends, good conversation, good food: as someone once sang: “Those were the days….”