The Voice of Indigenous and Heritage Speaker Students at the UW 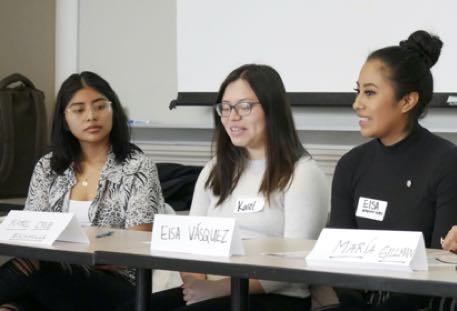 A broad definition of a heritage speaker, according to Fishman (1981, 2006), “is anyone who has an ethnic, cultural, or other connection with a language, regardless of whether that person learned the heritage language as a child” (In: Benmamoun, Montrul, and Polinsky, 2013). This definition applies in different degrees to the UW Indigenous students: Elsa Vásquez, Karol Janet Cruz Escamilla, and Nancy Mendoza Ruiz, who participated in a panel discussion on February 22nd, 2020, at the Heritage Language Symposium, hosted by the UW StarTalk Program through the Language Learning Center. The three student panelists shared their experiences as Indigenous people and students within the United States and Mexico.

What the heritage speaker definition mentioned previously does not specify are the emotional connections, which are an intrinsic part of being a heritage speaker of any given language. In the case of the undergraduate students in this panel, these emotions are associated with the pride in their heritage and the challenges they faced throughout their education in Mexico and in the United States. Moreover, Elsa, Nancy, and Karol represent the diversity of heritage speakers in which the level of proficiency and formal education in multiple heritage languages—including Spanish and Indigenous languages—varies according to their life experiences.

Elsa and Nancy are both Oaxacan and Karol is from Yucatán, Mexico. Elsa was born in a small village in Oaxaca, where she spoke Mixteco as her first language until the age of 5. She then moved to the United States and had to learn Spanish (also as a heritage language) and English, as she received her formal education in the U.S. Elsa understands Mixteco, but no longer speaks it. One of the consequences of the Indigenous language erasure that Elsa has faced is not being able to speak to her grandmother, who grew up in Oaxaca and speaks Mixteco: “Now that I am grown, there are so many things I want to tell her,” she said.

Nancy was born in Oregon, but both of her parents are from Oaxaca. While she understands some words in Mixteco from listening to her parents, she does not speak it. Spanish has become the heritage language that she uses to communicate with her parents. Nancy attributes this to racism of non-Indigenous Mexican/Latinx people against Indigenous Latinx peoples. She now advocates for language revitalization within Indigenous communities and spoke on how important it is for communities to preserve their identities and their culture and work against the erasure of Indigenous languages by colonial ones.

Karol also expanded on the challenges faced by indigenous languages when she shared her experience with her Indigenous language, Yucatec Maya or Maya’taáan. She was born in the state of Yucatán, in the capital Mérida, Mexico. Growing up, her grandparents spoke Maya’taáan, but her father wished for her to learn Spanish instead: “My dad, I think he wanted me to have a better education, and in his mind learning Spanish was better to him,” Karol explained. Karol attended school in Spanish in Mexico until she moved to the United States during her high school years, having to learn English as a second language. The colonial language often takes the role of higher status in post-colonial countries leading to the erasure of Indigenous language in the Indigenous communities. Karol also reflected on how she had to learn Spanish after moving from a small city in Yucatán, where she grew up speaking Mayan until the age of seven, to the state of Guanajuato: “I was speaking my dialect and people would look at me like ‘what are you saying?’...I didn’t realize how much Mayan I was speaking on a daily basis,” she said.

The panel discussion showed the importance of the decolonization of our classrooms and of creating teaching practices that are more egalitarian and that recognize the shortcomings of our own educational systems, in Mexico, the United States, or elsewhere. One of the panelists recalled a time when she had to deal with bullying for being Indigenous:

In the wake of social movements in the United States with the Black Lives Matter (BLM), many departments at the UW offered letters of solidarity with the BLM movement and also with other minority groups, including Indigenous peoples. We hope this panel presentation serves as a reminder of the work ahead of us, in a long road in the name of social justice and inclusion.

As we write this article, we take pride in the Indigenous students at the UW and their determination in achieving their academic, life, and career goals despite all challenges. We congratulate them for setting an example and for being an inspiration to all of us!

Nancy Mendoza Ruiz and Elsa Vásquez are both majoring in American Ethnic Studies and Karol Janet Cruz Escamilla is majoring in Education, Communities and Organizations at the University of Washington. Elsa Vásquez took Spanish classes for heritage speakers at the UW with Teaching Professor and Director of the Center for Heritage Learning, María Gillman. Nancy and Karol are also graduating with a Minor in Portuguese language and Luso-Brazilian Studies. The full panel video can be viewed on the link below and is a powerful account on the experience of these Indigenous students:     https://vimeo.com/439416087/c8af982b1f