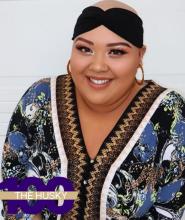 Chiara DeSantis, who graduated this March with a double major in Spanish and Public Health-Global Health, has been named a UW Husky 100 this year.

This recognition means the world to Miss DeSantis. Through the love and support from the University of Washington she has had the confidence to not only accept her multiracial identity, but her hair loss disease as well. Being a Husky 100 has given her the “the opportunity to spread awareness about Alopecia Areata, a hair loss disease that not only affects me but thousands of others,” she proudly stated.

As a Husky 100, Miss DeSantis also made the most out of her time at the University of Washington. She chose to pursue a double major in Public Health-Global Health and Spanish because her ultimate goal is to combine both fields of expertise and return home to Southern California to bridge healthcare disparities that affect marginalized populations, especially the Latinx community.

Her love of the language began in elementary school when she started taking introductory courses. Since then, she has intentionally studied the language and chose to major in Spanish because speaking it is crucial in her profession. She understands that by speaking the Latinx community's native language, she will be able to create a deeper, more meaningful connection with them while conducting public health work. It was through the Spanish major and the opportunity of studying abroad in Cádiz, Spain for four months, that she was able to gain a better grasp of the Spanish language… even though the accent was quite hard to understand in the beginning!

Being the only student from the Humanities, Miss DeSantis feels honored to represent the Spanish major as “[it] pushed me out of my comfort zone in the best possible way, which is something that will definitely be useful as I go out into the world,” she said!

Chiara’s determination, commitment to inclusivity and leadership is a powerful example of how students make a difference within our community and beyond. Congrats Chiara!

By Marilis Mediavilla, from interview with Chiara DeSantis