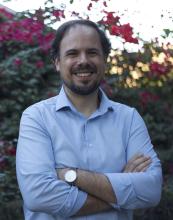 “Go out there and do things. Some of you are into film; some, into music; some, into video games, etc. Whatever it is, go for it. Find out what’s going on and figure out what you can do.”  This is Carlos Varón González's advice to students. Varón is an Assistant Professor at University of California, Riverside, who completed his MA in Hispanic Studies at University of Washington in 2008 before continuing on to Harvard University to complete his PhD.

All students should be motivated to involve themselves in the subjects they study: “You have the privilege of studying things that possess and make meaning, so be part of it. Engage with other people who are passionate about those same things.”

Throughout his career, Varón has found that the best experiences come from working with students who are passionate and engaged in their subjects of interest.  Proof of it is a situation he experienced on a course on soccer as a global cultural phenomenon that he designed while at Harvard. He remembers “students passionately discussing symbolic capital and unspoken ‘Fair Play’ rules or whatever, and me having to tell them that I appreciated their enthusiasm and they were welcome to continue the discussion, but that it was 6pm and I had to go home, sorry.”

Another motivational moment occurred at UC Riverside, where Varón has found that his students often inspired themselves out of a sense of service to their community: “[UC Riverside is] a Hispanic serving institution, in a city that is about 50% Latinx. The school prides itself in being the top university for social mobility in the country (based on Pell grant recipients) and 60% of its students are first-generation…. [Students] care about their education deeply, because for many of them their education is their whole community’s work.”

For success in academia, Varón recommends “a disposition to learn from others, learning to communicate (which includes communicating disagreement and standing up for what you believe in), and intellectual curiosity.”  He goes on, “Talk to somebody who has been in the job market recently (feel free to drop me a line), to your professors, to your friends. Read others’ application materials and have others read yours, don’t be shy. (Much of this applies to publications as well.) Take everything with a grain of salt, but you don’t know how your work and yourself come across until somebody tells you from their perspective.”

Going out and talking to people producing things they are passionate about will be rewarding not only to one who asks questions, but to the one answering them: “Ask them many, many questions, because they’ll enjoy the talk and they’ll be glad that somebody cares. This will build an incredibly useful network of models and support. But, mostly, there’s all the friends and experiences that you’ll make. “

Varón’s PhD dissertation “Malos tiempos para la lírica: poesía y cancelación del espacio público.” was “about the changing understanding of the political and ontological status of the poem after the Spanish Civil War in a wide array of authors and genres.”  This dissertation forms the basis for his soon-to-be-published book La retirada del poema: literatura hispánica e imaginación política moderna.

Aside from his new book, Varón has also been busy writing articles and editing an academic journal, “I am particularly happy with an essay on Marta Sanz’s crime fiction forthcoming at the Journal of Spanish Cultural Studies. I was very happy to work at the JSCS as a managing editor for two years, so I think of it as a sort of closing of a circle.”

Carlos Varón González earned his BA from Universidad de Almería (Spain) in 2005, his MA in Hispanic Studies from University of Washington in 2008, and his PhD from Harvard University in 2015. His new book, La retirada del poema: literatura hispánica e imaginación política moderna, from Iberoamericana Vervuert, will be published in spring 2020.