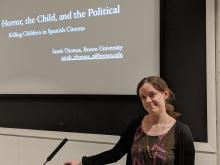 Despite the inclement weather, the promise of a fascinating talk on such morbid subject matter was enough to bring out a large group of students and faculty from both the Spanish and Portuguese Studies and Cinema and Media Studies departments. When Thomas began her presentation, Allen Auditorium was warm and ready.

The title of the presentation contained the clever linguistic play between “killing” as an adjective and as a verb. In the first of two films that Thomas would analyze, ¿Quién puede matar a un niño?, a horde of kids on a deserted Spanish island become murderous—or actual killer children. In the second, El orfanato, it is the children who suffer as the mortal victims of adult actions.

Thomas posited that these films’ use of children for horrific effects stems from “the child’s exceptionality in the cultural imaginary.” In other words, the image of the child over the past few hundred years has become one of innocence and hope for the future. Because of that, when they become killers or are killed, the adult who watches these movies is fundamentally disturbed.

According to Thomas, the films equally attack the notion of the innocent child and reify it for their purposes of instilling terror. Indeed, the child needs to be seen as innocent for the subsequent shock factor of them killing or being killed to have any effect.

However, Thomas was not convinced that the films were only concerned with arousing fear in the hearts of viewers. Rather, she was concerned with the connections both films had with the political happenings of their times, namely the Spanish transition into democracy and the brutal dictatorship that preceded it. Despite the fact that both were marketed for international audiences, Thomas pointed out that the use of children was inextricable from a specifically Spanish historical memory of lost innocence and uneasy transition.

After Thomas concluded her presentation, she was thanked with an enthusiastic applause from the audience. What with the fascinating subject matter, Thomas’ quick wit, and her engaging delivery, the event was nothing if not a success. As it seemed like just about everyone wanted to know more about those killing children, the Q&A session was a great way to cover the topic and to finish the event with a vibrant discussion between many of those in attendance.