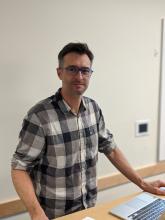 The lecture was given in front of a well-attended audience of university faculty and students. The presentation, given as part of his fellowship, was, as Lanctot put it, a discussion of material he is “working on during the course of his residency [at University of Washington].”

Lanctot’s presentation began with an examination of two cultural artifacts, both allegorical lithographs, c. 1825, of Simón Bolívar’s then-recent victory at the Battle of Junín during the Peruvian War of Independence.  He situated the two images within the cultural landscape of post-independence Latin America in order to demonstrate how they articulated a logic of spectacle that facilitated the invention of the people as a political actor.

An analysis of literary allusions in the context of the depiction of historical and political events led to a discussion of Uruguayan writer Angel Rama’s posthumous 1984 treatise La ciudad letrada (The Lettered City).  Lanctot characterized Rama’s work as a “sweeping genealogical account of Latin American intellectual history.”  Central to Rama’s book was the theory, as Lanctot put it, “the notion that writing not only served as an essential medium for those disputing power, but also regulated, sanctioned, or suppressed alternative cultural practices.”

Lanctot went on to discuss how recent scholarship has challenged the primacy of the written word in 19th Century Latin American political discourse through examination of contemporary technologies, such as daguerreotypes, magic lanterns, and lithographs, as well as marginalia. Analysis of visual culture produced through such mediums, resembled a “republican bricolage” or una ciudad dibujada­—an “illustrated city” to contrast with Rama’s “lettered city.”

Lanctot is conducting research at University of Washington during the current academic year. The American Council of Learned Societies (ALCS) Frederick Burkhardt Residential Fellowship for Recently Tenured Scholars provides a year of funding to scholars to conduct research away from their home institution.