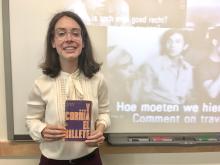 In this period, Chilean workers and left-wing intellectuals engaged with the idea of “popular power”, a form of a direct democracy led by working-class individuals. That is why, as diverse Latin American Studies scholars have proposed, Allende’s government during the early 1970’s can be seen as an epoch in which the workers defended Allende’s socialist system rather than attempting to install a communist dictatorship of the proletariat.

Many popular culture objects from these years (newspapers, magazines, photos, films, literary texts) are nowadays available in archives and, according to Prof. Hochberg, "some point to how artists and writers of the period engaged with the concept of popular power from a cultural standpoint.”

Y corría el billete is considered an important novel representing workers in Chile. Atías’ text is a hybrid form combining literary forms with tabloid literature, and, with 50,000 copies, it became the most distributed first edition at the time. The novel includes monologues, one-sided conversations, disconnected sections, and a series of political terms in slang and a colloquial register.

Prof. Hochberg pointed out that Y corría el billete is clearly influenced by feuilleton literature, as it aimed to attract political readers through entertainment and melodrama. For instance, the main character seduces a Communist delegate and later has an affair with her sister.

However, as with other popular culture texts of the period, it also inserted a political message, as diverse characters have conversations connected to popular power and the workers movement, which seemed to have a pedagogic function for the reader.

El realismo socialista is a black and white feature film that aimed to re-appropriate Chilean history by depicting the interactions of workers in a factory. It was originally believed to be four hours long but only fifty minutes are available nowadays, so it is believed that this version is abridged. Moreover, the film was never shown in public so people who claim that they saw it only have a hazy experience.

What is clear from the film, Prof. Hochberg maintains, is that it presents diverse instances of misreading popular power and it criticizes the language about this workers democratic system.

Prof. Hochberg is currently working on a book manuscript related to the topic of her talk and her research focuses on diverse Chilean authors including Roberto Bolaño, Enrique Lihn, and José Miguel Varas.