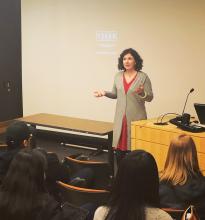 On March 7th, 2019, the UW Spanish & Portuguese Studies and UW Nutritional Sciences cosponsored the screening of the gastronomic documentary, The Txoko Experience. The Secret Culinary Space of the Basques. The viewing was paired with a few delicious Spanish tapas, as well as the guest lecture, "Slow Food on Camera: An Introduction to Basque Cuisine" by scriptwriter Professor Marcela T. Garcés of Siena College. In addition to the recent production of her documentary, Professor Garcés continues to focus her passions around cultural education through cuisine, and particularly that of the Basque Region of Northern Spain.

The film featured an in-depth, authentic perspective on Basque food culture, and specifically emphasized the celebration of the Txoko. In Basque tradition, it represents a joining of society in the celebration of a meal together. Specifically, the members of these gastronomical clubs were typically comprised of men and usually had around 80 members total. However, in contemporary settings, the Txoko is becoming more inclusive and women sometimes also join as participants, with the primary purposes of eating, drinking, and socializing, while leaving the cooking up to the men.

The Txoko meal and Basque cuisine as a whole, emphasize the importance of slow food, a farm-to-table concept that seeks only the most garden-fresh, newly harvested products. As highlighted in the film, all members of the community contribute by collecting the freshest of ingredients on the day of the feast, such as seasonal produce from the farmers’ markets or the catch of the day from local fishermen. The collective contribution makes this meal similar to that of a potluck, but it’s tradition is unique, and a trademark of Basque culture. Other specific rituals include electing the best cook of the community as the principal preparer of the feast, and inviting all members to gather in a sharing of community and song.

Moreover, this documentary narrates a true and authentic insider’s perspective straight from the mouth of Michelin star chefs. Influential culinary members illustrate their distinct experiences via a series of interviews with the most distinguished Michelin Star Basque chefs such as, Elena Arzak of Restaurante Arzak, Victor Arguinzoniz of Asador Etxebarri, Josean Alija of Nerua Guggenheim Bilbao, and Aitor Arregi of Restaurante Elkano. One chef identified her favorite part as creating a complex meal that involves the tedious preparation of an intricate recipe, one of which is ultimately able to trick its audience through the visual presentation of a shockingly simple plate. Another key chef mentioned the importance of capturing the senses of taste, but through the art of aroma, not only through palette, but also by means of perfumery and ambiance.

Not only does the film offer an exclusive view on the Txoko from a Basque standpoint, it also shares how the experience might differ from a female or culinary tourist perspective, such as in the unique and memorable experiences presented firsthand by Professor Garcés. After its final production, the documentary became available to other culinary tourists worldwide as it was aired on all international Iberia flights.

The Txoko Experience. The Secret Culinary Space of the Basques is not yet available to view on DVD or streaming platforms, but the trailer for the documentary may be viewed on YouTube.  To learn about other interesting events and activities in Spanish & Portuguese Studies, please follow us on Instagram!