Spain: A Country Where Culture and Business Go Hand in Hand 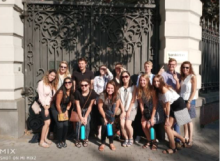 UW Students explore Spain’s economy from the inside.

In Spain, the most profitable bank is also one of the smallest. There is a department store where you can buy everything from a can of olive oil to a Chanel purse. There is also a mysterious winery that decorates its cellars with expensive paintings and discards its wine when the quality of the harvest doesn’t match their standards.

For three weeks, thirteen UW students visited these and many other Spanish companies as participants of Business and Cultural Dynamics in Spain, an exploration seminar offered by the Department of Spanish and Portuguese Studies and the Foster School of Business that aims to provide advanced Spanish students with an insider’s look into one of the Eurozone biggest economies. Michael Lewis, a Business major, chose the program because “the interactions between banking, education and the economy are really interesting to me”, and while in Spain, he was able to see how these fields are responsible for the technological and economic development of the country. 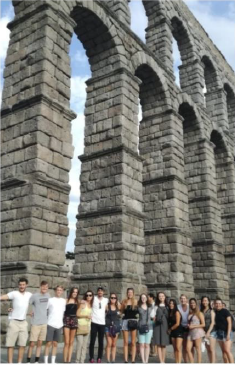 The seminar, based in Valladolid and Madrid, offered its students full linguistic immersion into Spanish. Marilís Mediavilla, the program director, created this Exploration Seminar to give students pursuing degrees in Spanish and other interdisciplinary studies the opportunity to improve their second-language skills when looking for job opportunities at US-based companies or abroad; for this reason, all activities are conducted in Spanish. “By the end of the three weeks, I feel like my confidence in speaking the language went up tremendously” said Ava Rezaee, a Political Science major. “I feel that I improved my Spanish the most in those three weeks than I have been able to in my day-to-day Spanish Classes”, she added.

At the same time, participants spent the first week of the program living with host families to help them prepare linguistically and culturally, but also to show them a glimpse of everyday life in the country, being food culture a significant part of it. Olivia Battison, who is studying Business Administration, particularly enjoyed group meals “because the culture revolves so much around food, it was a time when we could fully immerse ourselves and join in the evening festivities alongside Spaniards”.

Medieval cities like Segovia and Toledo, Madrid’s historical center and even Velasquez’s Las Meninas were featured in the program, complementing the business side of the Exploration Seminar. Wenqi Huang, an Economics major, enjoyed this fusion of academic and cultural activities. “The program had a great balance of in-class lecture sessions, company visits, cultural explorations and free time to spend as we want”, she said. Moreover, it is impossible to expose students to Spain’s unique history and sights without leaving the classroom. According to Aoi Hunsaker, majoring in Speech and Hearing, “You need to walk in the streets, talk to employees in shops, go to museums, and ride the train around Spain to fully learn and appreciate how diverse and beautiful Spain is”.

This was the second edition of the program, and planning for Early Fall 2019 is underway. If you want to learn more about it, contact Marilís Mediavilla at marilism@uw.edu, and visit our stand at the UW Study Abroad Fair this coming November 8, from 10 am to 2 pm in the HUB.