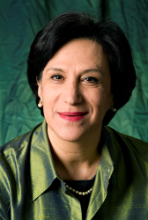 Principal Lecturer María Gillman has had a scholarship named in her honor at Auburn Riverside High School.  The Maria Gillman/Bryan Robinson Scholarship will be awarded to native Spanish speakers who have been accepted to a 2-year or 4-year college or university.  The scholarship, which is granted on an annual basis, awards between $250 and $500 to the recipient.

Tom Adams, Principal at Curtis High School in University Place, Washington, explained the decision to name the scholarship in honor of María Gillman, and another instructor of his, Bryan Robinson: “Sra Gillman and Bryan Robinson, a teacher I had in Spain who was like Sra Gillman, were the two teachers I wanted to honor because they helped me understand and ultimately become highly proficient and fluent with Spanish.  I benefited from my fluency by travelling to South America several times, making friends all over the world, working as a Spanish teacher, translating for courts, and helping others and I wanted to pay it forward.”

“After living in Ecuador and Spain, travelling all over the world, and learning more about poverty and the long-term effects of poverty on students and students of color, I knew I needed to give back somehow as my income and influence levels rose.  I wanted native Spanish speakers, of which Auburn Riverside has a growing number, to benefit as I worked to provide a preferential option for those affected by poverty” wrote Adams via email.

When asked what Gillman did as an instructor that helped him as a student, Adams elaborated: “Sra Gillman did three things for me, a student who struggled in Spanish, that stood out to me upon reflection after I studied abroad in Ecuador and Spain.  The first thing she did was as a teacher, she worked very hard in the classroom…enabling me and my classmates to improve our understanding.  The skill and patience level required to do that well is not common to every teacher.  The second thing she provided for me was time and empathy during office hours…. Sra Gillman took a lot of time with me when she could have been less accommodating.” Adams and Gillman also developed a professional relationship: “The third thing she offered me was her time after I began teaching Spanish at ARHS.  I continued to reach out to her via email for help, and she always supported and helped me.  Her empathy stuck with me.”

Adams elaborated on the requirements for earning the scholarship: “a native Spanish speaker who comports him/herself well, attends school, and has been accepted at a 2-year or 4-year school.”  The scholarship may still be awarded if there are no candidates that completely fulfill the requirements: “One year when we did not have any applicants fitting those descriptions we gave it to a girl who needed the money for college; she has since graduated with her 4-year degree and has been accepted to WWU's Masters program.”

Tom Adams, now Principal at Curtis High School in University Place, Washington, taught and coached at Auburn Riverside High School for 13 years before moving to his current institution.  The scholarship was created with the assistance of Auburn Riverside Career Councilor Steve Mead, and has been offered for the last seven years.