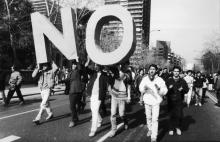 In a room full of members of University of Washington’s community, including SPS Department professors and graduate students, Prof. Rojo presented some excerpts from the second volume of his Historia crítica de la literatura chilena, a three-volume literary history he has been working on in recent years with his Universidad de Chile colleague Carol Arcos.

Forty-five years ago, on Sept. 11, 1973, the Chilean Armed Forces bombarded the Palacio de la Moneda, the Chilean equivalent of the White House. This coup d’état led by Augusto Pinochet put an end to Salvador Allende’s socialist democratic regime and started a brutal dictatorship that would only end 17 years later. Torture, murders, and enforced disappearances were common crimes in this epoch and it is believed that approximately 40,000 people were victims of the totalitarian regime, while many other thousands found themselves forced to flee the country.

What measures did Pinochet use to grab the cultural, politic, and economic control of the Chilean nation? Has the Southern country accomplished an actual return to democracy after the dictatorship ended? How did some novelists respond to this complex sociopolitical context?

Prof. Rojo responded to these questions during his talk and the following Q&A session.

One of the most interesting points the Chilean professor brought up is the fact that the South American country experiences a democracy that has not managed to set itself apart from the dictatorship led by Pinochet. In fact, the current Chilean constitution is only an amendment from the 1980 version approved in a controversial plebiscite that took place under the military dictatorship.

It is not surprising, then, that although a vast majority of Chileans consider Pinochet’s regime as one of the most disgraceful periods in the history of their country due to its several violations of human rights, a small group of citizens still praise the dictator since, “he saved Chile from communism.” Other groups have even claimed that these human rights violations did not happen at all. That is why almost half of the Chilean population believes that this topic still divides their society and approximately one out of five people thinks that the nation has not reached a complete reconciliation with its own past.

Prof. Rojo, who specializes in the intersection between politics, culture, and literature, has been a visiting professor at many universities in the U.S. and South America. He has published several books and articles with topics including exile, dictatorship and cultural studies, and is nowadays working on the second and third volume of his Historia crítica de la literatura chilena while conducting research on the representation of narcoterrorism in literature and pop culture.