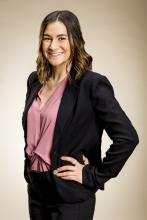 Each year, the Husky 100 recognizes 100 UW undergraduate and graduate students from Bothell, Seattle and Tacoma in all areas of study who are making the most of the time at the UW,” said the Husky 100 website.

“Being selected as one of the Husky 100 is an incredible honor. All 100 of us represent what it means to take full advantage of one's husky experience from academics and on-campus involvement to philanthropic endeavors and extracurricular activities,” said Norton.

Gutiérrez noted the selection to the Husky 100 was indicative of the personal support of those around her, “Being a young mother and full time student has been extremely difficult, but being selected for the Husky 100 has made me see that there are a lot of people who believe in me.”

The decision to major in Spanish is a reflection of both Gutiérrez and Norton’s effort to make the most of their time at the University of Washington.  Gutiérrez sees her studies as training for a life and career spent serving her community:  “I come from a community with a large, Spanish-speaking population and I want to go back and be a dentist there when I am done with school. I feel that my patients deserve the best care possible and having me be able to explain everything clearly in Spanish is a part of that.”

Norton echoed a similar sentiment, noting that, “My decision to major in Spanish allowed me to explore other cultures, while also providing exciting opportunities to travel and work in many different domains. A second language under my belt has enabled me to effectively communicate with local and global communities.”

The Husky 100 gain access to additional resources to aid in their professional development.  Gutiérrez and Norton see their education as Spanish majors as providing an understanding of Hispanic cultures and communities, an asset to their future success.  Gutiérrez reflected, “The only Spanish-speaking culture that I was aware of while growing up was the Mexican culture. I thought that all people who spoke Spanish had the same traditions, food, and sayings. Through classes for my major and study abroad, I have been able to experience a variety of cultures and realize how diverse all of the Spanish-speaking countries are. ” Norton sees her education in a foreign language as a way to make a positive contribution to the world: “Language is a vital tool for understanding, decision-making and growth. Being able to communicate with Spanish-speaking communities will serve me well in my aspirations to eliminate inequality in nutrition and education specifically. ”

Gutiérrez and Norton are two of the eight students of the Humanities Division of the College of Arts & Sciences to receive the award this year.  For more information, visit the Husky 100 website.

This version of the article fixes the broken link to the Husky 100 website.  It also corrects the number of students in the Humanities Division of the College of Arts & Sciences who were selected from seven to eight.