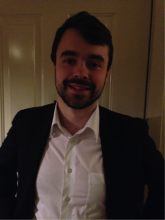 When Cameron Brandy transferred to UW from Bellevue College in 2013, “he hit the ground running,” said Senior Academic Counselor, Suzanna Martínez. “Cameron took copious notes at our first meeting, wanting all the information he could absorb to move towards his goal and his majors."  By all accounts, his enthusiasm and dedication have not waned one bit.

Brandy studied Spanish at Bellevue College after having studied on his own at home. “Studying Spanish at the college level was stimulating and rewarding. I had my first exposure to Neruda, Cortazar, and Marquez and finished the 200 level quickly.” When he ran out of classes to take, Brandy tutored Spanish and attended a weekly conversation group. “My goal was to finish my AA and transfer to the UW,” he said.

On double majoring in Spanish and Latin American Studies, Brandy reflected, “Simply studying the language, one gains only a passing knowledge of the broader social context of a region. Taking classes that dive deeply into the human forces shaping the Spanish speaking world makes the language come to life in a much more intimate way.”

Brandy was one of the few non-native Spanish speakers selected for a competitive internship opportunity at IFAP (Immigrant Families Advocacy Project), a student-run legal aid group that helps undocumented persons who are victims of violent crimes obtain visas. “They need translators in a legal setting, which requires a degree of emotional intelligence and professionalism,” said Brandy, “as well as conversational competence in Spanish.”

Brandy is impressed with the caliber of his Spanish Department teachers.  “Sam Jaffee (Lecturer) brings a subtle sense of humor to class, which I enjoy. It is obvious that he puts careful thought into every lecture,” he said.

“Edgar O'Hara is a no-nonsense professor,” said Brandy, “who teaches in the best of the classical academic traditions. “If a student makes a mistake, he helps find the correct answer through careful questioning, sharply and wittily pointing out errors in a kind but tough way and drawing on an encyclopedic knowledge of Hispanic letters. I don't think many modern American students are prepared for that sort of environment anymore.”

“Inmaculada Raneda-Cuartero, Senior Lecturer, helped us condense and conceptualize several centuries of Latin American and Spanish history with humor, openness and encouragement,” said Brandy of Raneda-Cuartero’s Spanish 322 course. “She also recommended what has become my favorite restaurant: a Basque joint in Montlake called The Harvest Vine.”

Brandy works at the Malt & Vine in Redmond, which sells international and local beers. “Craft beer has its own growing culture these days,” he said, “and it’s relaxing to talk about and experience something interesting that isn't academic.” Brandy enjoys sports (shhhh…  he is an MSU fan), and also loves to cook. “I make an awful tortilla de patatas but I keep trying at least!” he laughed.

Brandy, who spent his boyhood years on campus with his mother while she was studying German, is very much at home. “I used to run around Denny hall with my action figures, and later I skateboarded in Red Square,” he recalled.

Brandy plans to teach Spanish at the Community College level, because, for him it was “a horizon-expanding experience that changed my intellectual life.”

Martínez consistently hears positive comments about Brandy from faculty. “He is just simply the kind of student that any faculty member would like to have in class, and any advisor would like to work with.  It is a pleasure to have him in our department!”