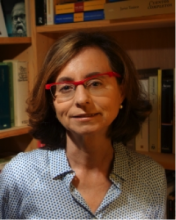 Congratulations to Inma Raneda-Cuartero on her nomination for a Distinguished Teaching Award through UW’s Center for Teaching and Learning. Criteria for this award include mastery of subject matter, ability to engage students both in and out of the classroom, and innovative course and curriculum design.

“Teaching is a privilege and a responsibility,” said Raneda-Cuartero. “I am a firm believer that teaching should focus on collectively exploring ideas, not just conveying information. Raneda-Cuartero considers herself a moderator and facilitator rather than a leader in class discussions. “I choose discussion topics related to student concerns, pose questions relevant to their interests, and encourage them to think critically and challenge their own assumptions.”

Raneda-Cuartero’s students participate in cultural experiences related directly to Hispanic life in Seattle and the State of Washington. Working in teams of three, they practice language skills in authentic situations. “The collaborative teamwork approach results in deeper learning and understanding,” explained Raneda-Cuartero. “Students develop empathy and intercultural sensitivity; positive attitudes toward the Hispanic culture; and greater willingness to communicate in Spanish outside of the classroom.”

The Teaching Award nomination was a surprise to Raneda-Cuartero, but not to her students, many of whom point to “Inma” as having been influential in their development as Spanish scholars. Raneda-Cuartero, who measures students by their individual advances and continued learning, said, “Formative assessment should be based not just on the final product but on the student’s progress. In this way, not only knowledge is evaluated, but also skills and attitudes.”

Raneda-Cuartero’s teaching extends beyond the UW classroom. Last summer, she designed a 20-hour intensive seminar for high school teachers who wanted to perfect their linguistic and pedagogical skills as well as enrich their cultural knowledge of contemporary Spain. SPANISH 361 Contemporary Spain, introduced participants to major historical, cultural and socio-political themes of 20th and 21st Century Spain. “We explored the cultural production of the Spanish Civil War, the Franco regime, and different narratives of cultural identity in contemporary Spain, particularly the period of political transition from dictatorship to democracy in 1975 to the present,” she explained. “Conducted in Spanish, the seminar helped participants engage in the processes of critical thinking, dialogue, comparison and contrast.”

Because of its success, Raneda-Cuartero is planning to offer the seminar again this coming summer 2015 through the Center for Spanish Studies at the UW.

Raneda-Cuartero has been active in creating and giving workshops on teaching Spanish language pedagogy for Spanish Teachers through the Center for Spanish Studies at the UW.  “I enjoy sharing my research, findings, and ideas with Washington State teachers,” she said. “Not only they but I as well benefit tremendously from that exchange.”

This is Raneda-Cuartero’s eighteenth Academic Year at UW. “I love the UW Campus,” she said. “It is a great place to work and spend my days.” Raneda-Cuartero appreciates the collaborative nature of teaching at UW. “Teaching requires help, encouragement and support of many people, first and foremost, the students with whom I share many hours in and out of the classroom exploring the many facets of learning a second language,” she said.

“I am deeply grateful to my colleagues and all members of the Department,” reflected Raneda-Cuartero. “Professor Leigh Mercer has provided me with inspiration and has given me compassionate guidance, thoughtful insight and support in countless ways. She often believed in me more than I did myself.”

Raneda-Cuartero also expressed great appreciation to Professor Donald Gilbert-Santamaría for his intellectual motivation and invaluable encouragement and friendship. “He has always counseled me with words of wisdom.”

With appreciation for her colleagues and the past eighteen years at the UW, Raneda Cuartero said, “We all share the highs of excitement and lows of frustration as we enter our classrooms every day. My colleagues teach me to see things differently. Their friendship and caring has made my life in Seattle this past 18 years a pleasant memory. I thank them all.”