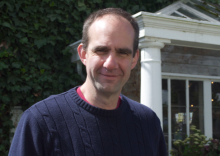 Piled on Donald Gilbert-Santamaría’s desk is a set of very old books. With their worn brown covers and gold lettering, the books have a reverential presence in the room. They are the elders, the ancients that provide a connection to the newer books surrounding them and remind us of a time when ideas that are still being explored today were new.

Gilbert-Santamaría, Associate Professor, specializes in Spanish Early Modern literature, which covers the period from 1492 to the mid-seventeenth century. His undergraduate degree from UC Berkeley is in English and Economics as is his graduate degree in Comparative Literature.

“I am the product of a public university,” explained Gilbert-Santamaría, whose parents were elementary school teachers and the first in their families to go to college. “Access to a school like Berkeley that is committed to excellence in public education is the reason I am sitting here today,” he said.

Gilbert-Santamaría came to UW in 2001 after working for five years at the University of Tulsa, a private school. “Teaching in a public university is satisfying,” he explained, “primarily because of our ability to bring a high-quality education to a broad population.”

Gilbert-Santamaría’s undergraduate classes include a course on Cervantes and Don Quixote, a Spanish drama class and a summer course on sixteenth- and seventeenth-century Spanish poetry. “As someone who works in a field that’s a bit antiquated,” he remarked, “it is rewarding to watch students connect with material they didn’t even know existed.”  The time period Gilbert-Santamaría teaches may be historically remote but the themes are relevant to the present. “There are themes that persist throughout hundreds of years,” he said.

In addition to teaching undergraduate classes for the Spanish Division, Gilbert-Santamaría teaches one course for the Comparative Literature Department and one graduate seminar per year.  His current graduate seminar, based on his research for a book project, examines representations of friendship in the Spanish Early Modern period that challenged the paradigms inherited from classical antiquity. “For example, in Don Quixote,” explained Gilbert-Santamaría, “the questions and contradictions Cervantes poses present something different from the ideas about perfect friendship espoused by the ancients.”

Gilbert-Santamaría’s sixteenth and seventeenth century poetry class is taught in the summer intentionally because it is a slower time of year, allowing students to dig deeper. “There is a long tradition of poets aspiring to immortality through writing. But that only works if someone reads the poems,” he laughed. How do students fare in a class like this during the beautiful Northwest summer? “If anyone can make sixteenth century sonnets and poems not boring, especially in a daily three hour summer class, Professor Gilbert-Santamaría can!” laughed Pragya Kc, one of his students.

Speaking about his work and that of his colleagues, Gilbert-Santamaría said, “We are custodians of a cultural legacy. There are very few people who work in this specific period and a lot of skepticism about the value of the humanities in general.” But that is not enough to stop him from continuing to teach “esoteric things that have intrinsic value.”

Gilbert-Santamaría appreciates the collegiality and informality of the Spanish and Portuguese Studies Division at UW. “People have the freedom to pursue their intellectual goals in this department,” he said. “A deeper cultural understanding is the most important thing we give our students along with the concrete skills of being able write and think and express themselves.”

Reflecting on his role as a teacher, Gilbert-Santamaría affirmed, “We live in a society where education is meant to have a vocational end. While that’s certainly true, it’s also nice to teach something that has other redeeming values.”