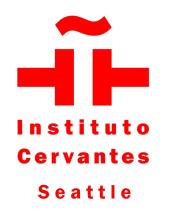 The Cervantes Institute was founded in Spain in 1991 to promote the teaching and learning of Spanish and to bring to light the diverse cultures of Spanish speaking countries.

The Seattle branch of the Institute, Aula Cervantes Seattle, is housed in Room B-209, Padelford Hall. Among the Institute’s offerings, available to both students and teachers, is the Diploma in Spanish as a Second Language (DELE), a certification in six levels of Spanish proficiency. Also through the center is a wide selection of online Spanish language instruction programs (through the Spanish Virtual Classroom (AVE).

“The DELE exam is one of the most important things we do,” said María Miguéliz, director of the UW’s Aula Cervantes. She describes it as the equivalent of a language visa, an internationally recognized proficiency certification. “If you are interested in proving your level of Spanish, if you are planning to travel or work in a Spanish speaking country, if you are applying for a job that requires Spanish knowledge,” said Miguéliz, “then the DELE would be a diploma to enhance your resume and market yourself.” The next DELE exam takes place in April of 2014 and the following in May of 2014 with a registration deadline in March and April. Contact Aula Cervantes for more information. aula.seattle@cervantes.es

The Institute, in collaboration with the division of Spanish and Portuguese Studies and the Honorary Consulate of Spain, offers a number of academic and cultural events, some of which are open to the public. Most are free of charge but some need tickets. Check the website to learn about details of upcoming events. http://seattle.cervantes.es/en/default.shtm

Mark your calendars for these events:

American blockbusters shot in Spain during the Franco dictatorship.

An important cultural event to note is the upcoming exhibit at the Seattle Art Museum of world-renowned Spanish artist, Joan Miró. The exhibit is titled Miró: The Experience of Seeing and will be exhibited February 13 – May 25, 2014. “Although not organized by the institute, I think people will want to know about this,” said Miguéliz. For more information go to the SAM website: http://www.seattleartmuseum.org/exhibit/exhibitDetail.asp?eventID=25711