A Room with a View | Alumna Spotlight on Jill McKinstry 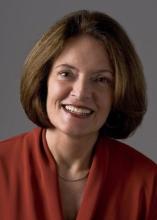 The view from Jill McKinstry’s light-filled office is stunning. Located on the southeast corner of the Odegaard Undergraduate Library, windows wrap around two walls overlooking the campus that has been McKinstry’s home away from home for more than 40 years.

Odegaard Library, much like McKinstry herself, is open, warm and welcoming, inviting visitors to walk around, sit and read, explore. “The beauty of librarianship is that you draw on everything you have ever done in your life,” said McKinstry. “You look at systems of knowledge, the organization of knowledge and help people find what they are seeking.” McKinstry feels indebted to the College of Arts & Sciences “for helping me to find a niche and allowing me to stay at an institution I have loved since 1965.”

A Seattle native, McKinstry began her relationship with UW as an undergraduate student in the mid 1960’s, gravitating to the Spanish Department. “I adored the faculty members,” said McKinstry for whom a summer immersion program in Guadalajara proved pivotal in her decision to major in Spanish.

McKinstry taught for three years following graduation but longed to be back on campus full-time and began a Masters in Spanish Literature and Linguistics in 1972.

“It was a politically charged and extremely formative time,” she recalled. “The people I met and worked with during this period stretched and pushed me in many directions.” Among these were the late Abe Osheroff who fought with the Abraham Lincoln Brigade in the Spanish Civil War and Suzanne Peterson, currently an Associate Professor Emerita.

Two student trips to Madrid under the leadership of Professor Farris Anderson, now retired, were highlights of her graduate school experience. The first, during Franco’s dictatorship in 1974, was a time of heavy censorship and underground theater. “We had tertulias with famous playwrights such as Alfonso Sastre and Antonio Buero Vallejo,” marveled McKinstry. The second trip in the spring of 1977 followed Franco’s death. “The theater had changed,” she said. “Censorship was lifted and there was more openness, but nowhere near the same depth.”

While taking a break from school and full-time work to raise her children, the campus siren called again. Studying Classical Greek, “just for fun,” she said, provided a fascinating insight into the structure of language, long an interest of hers. Her “aha” moment came when she learned that Classical Greek students often pursue academic librarianship. Despite the fact that admissions had closed, McKinstry talked her way into the program.

“I was naïve about the rigors of Library Science School,” she said. “I was studying, working at one of the campus libraries, raising two children…  I don’t know how I did it.”

But she did. Her UW library career began at the Fisheries Oceanography Library where, she said, “I learned yet another language: the language of marine science.” Next McKinstry became Assistant to the Director of UW libraries, during which time she was instrumental in the libraries’ pre-Web migration to an online system and led a team that developed databases and online tools.

McKinstry was named Odegaard’s Director in 1997 following an internal search. One of her passions has been to encourage undergrads to do research and do it well. Among her many accomplishments are:

Outside of the library, McKinstry and her husband, Joe, who owns a construction company, are busy! They and their children volunteer extensively with Habitat for Humanity. They purchase art works from local artists that resonate and have meaning for them. They are avid sailors and cyclists and play in a local orchestra (McKinstry plays the cello).

And, of course, they read! McKinstry’s most recent reads are The Orphan Masters’ Son by Adam Johnson and The Boys in the Boat by Daniel James Brown about the famous rowing team from - where else? - UW!