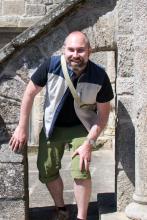 Matt London is not your typical undergraduate student. “I describe myself as a ‘student of a certain age,’” laughed London, 31 years old with salt and pepper hair. But the salt lends wisdom to the choices he has made regarding his studies at UW.

A Seattle native, London worked for Amazon for one year before attending S.U.N.Y. Purchase. When tuition costs became prohibitive, London left school but stayed in New York, working a number of jobs including producer’s assistant for the Broadway revival of A Raisin in the Sun. Five years later, London returned to Seattle and obtained an Associate’s Degree from North Seattle Community College, taking Spanish to fulfill the language requirement. It was there that London, whose previous interest in language was rudimentary, discovered the richness of the Spanish literary tradition.

Soon after acceptance to UW’s CHID (Comparative History of Ideas) program, London added Spanish as a second major. “Spanish is a natural and practical choice in the U.S.,” said London who is married to a Spanish speaker. An avid reader, Spanish literature has given him more options. “And,” he added, “learning a new language is re-learning who you are.”

London’s stint as a Spanish Peer Tutor at North Seattle Community College enhanced his experience in Léon. “Tutoring taught me that there are many types of learners,” he said, adding that this knowledge was useful in his work with children in Léon. “Children have a lot to teach us about learning a language,” he said. “They are not self-conscious or reluctant to take risks. If only we could all learn like that!”

During summer B-term, London took visiting professor, Félix Viscarret’s, film class, completing a short film in less than a month. Viscarret, an award winning film director, taught the 400-level class in English, using Spanish films to demonstrate film techniques. “Félix made us feel like this was a collaboration, like we were working on the same level,” said London. “I learned a lot and got great feedback throughout the process and all the films were successful.” London’s film, Cycling, centers around two friends, one of whom has no short-term memory. View the short film here.

In July, London participated in a panel for new departmental transfer students. “It was a great idea to give incoming transfers a sense of the department,” he said. “And it was an opportunity to share my experiences, and encourage students to apply for the many scholarships available through the department.”

“The Spanish and Portuguese Studies Division is a warm, accessible, open community,” reflected London. “There is an intimacy and an approachability that might be harder to find in other departments.” He especially credits professors Anna Witte, Inma Raneda and the late Leon Bensadón for making his transition as a transfer student so easy.

“My advice to transfer students, and all students for that matter, is to become drivers of their career at UW, working with an advisor, but participating equally. Prepare for advising sessions and you will enrich your experience overall,” said London, “possibly discovering some classes that you wouldn’t normally have thought to take. Do your work, plan your classes, and make the most of what the department and UW have to offer.”